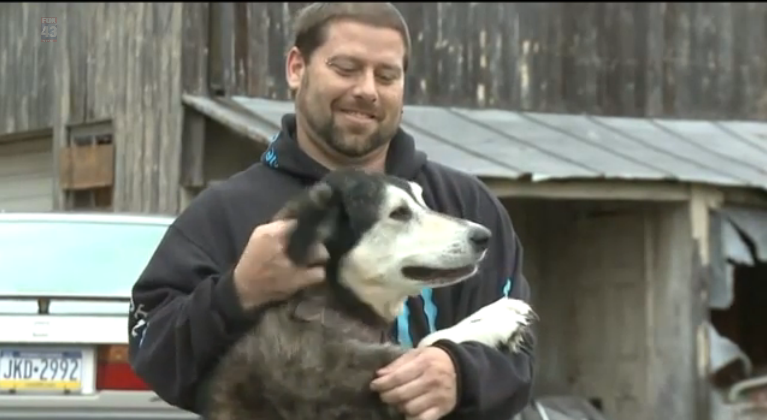 What appeared to be a canine sixth sense for judging character came into play on Sunday, October 25, when Tim Luckenbaugh’s big pet dog, Diesel, spotted a man hurrying through his family’s backyard in Dover Township, Pennsylvania.

“My dog noticed him, and I ran up to him and I was like, ‘Hey, can I help you, do you need something?’ ” Luckenbaugh told Fox 43 TV. When the stranger didn’t respond, the usually gentle Diesel did something that surprised his owner. He leaped up and grabbed the man’s arm and “pretty much hung on him the whole way from the bottom of my driveway to the top of my driveway.”

Diesel, who was named after he-man action star Vin Diesel, somehow sensed trouble, even though there was no way the 3-year-old mixed breed could know that the stranger had just committed armed robbery, clearing out a cash register at gunpoint in the nearby Dollar General Store. The man was fleeing through Luckenbaugh’s property to meet his accomplice in a getaway car.

With Diesel still clamped on, the stranger dashed to the waiting white Dodge Caravan. Luckenbaugh demanded to know what it was doing on his property.

Then he pulled a gun and aimed it at Luckenbaugh’s face.

In an audacious move, Luckenbaugh slapped the suspect’s hand and the gun, which fortunately was a plastic fake, went flying. Then the van took off and the crooks got away.

Diesel’s action was a total surprise to Luckenbaugh, who says his pet has always been friendly. He told Fox 43 that, “Police said from being a family dog he knew from instinct something was wrong. He's never bitten anybody. I'm glad that he knows from instinct, right or wrong. So that makes me feel good.”

The York Daily Record has dubbed the sweet-faced canine, “Diesel, the crime-fighting dog.”

It’s impossible to say why Diesel acted as he did. Did he really have an insight into the man’s character? Or was he reacting to heightened surges of hormones related to fear and excitement in the fleeing suspect? Scientists have shown that highly developed canine senses—most notably smell—allow them to read human emotions and make judgments about people. There's research suggesting that dogs have a special part of the brain that can pick up vocal clues to a person's emotional state.

But whether these senses can distinguish a good person from a bad one remains a mystery.

No matter what motivated Diesel, he gave Northern York County Regional Police something to go on when trying to catch the thief. In a press release, they noted that one of the men they are seeking “should have dog bite wounds on one arm.”

Police reported on Thursday that they have caught the thief, but are still hunting for the driver of the getaway van.