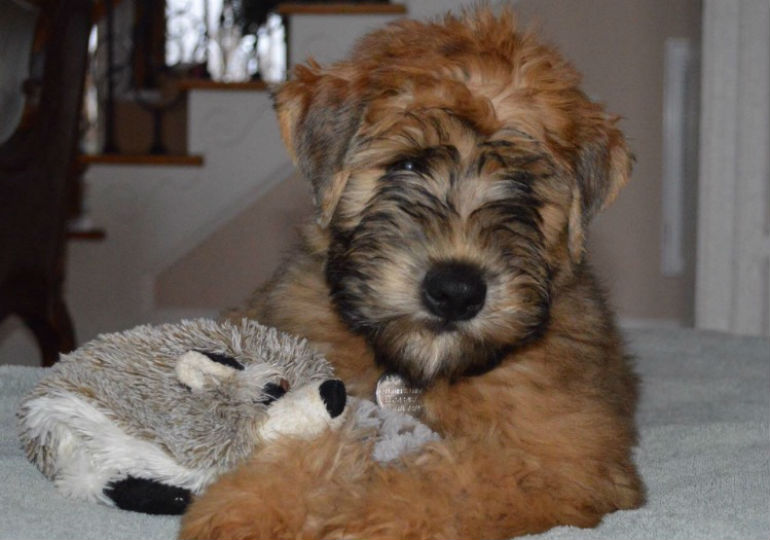 The Soft Coated Wheaten Terrier is full of energy, loves people, and makes a great family pet. Here are some interesting facts about this lovable breed:

1. They Are Native to Ireland

The Soft Coated Wheaten Terrier is one of four terrier breeds that are native to Ireland. According to legend, when the Spanish Armada sunk off the coast of Ireland, the blue dogs on the ships swam ashore and were welcomed by wheaten-colored terriers. Breeding between these dogs is supposed to have produced the Kerry Blue Irish Terrier.

Irish peasants owned Wheatens because they were not permitted to own hounds, Beagles, or spaniels; by law, those breeds were reserved for the gentry—people who had money to their names. Wheatens became known as the “poor man's Wolfhound.”

3. They Performed Every Farm Job

Because they couldn't own the aforementioned dogs, poor farmers used Wheatens to perform pretty much every job on the farm. They herded livestock, hunted vermin, guarded the property and family, and worked as gun dogs. To this day, Wheatens have retained their versatility. They often compete in agility, tracking, and herding competitions.

4. They Are Born in a Variety of Colors

The Wheaten's signature pale beige coat does not come in until he reaches adulthood. Wheaten puppies are born different colors, including white or creme (and beyond!), and puppies under a year may carry deeper coloring and occasional black tipping.

5. One Wheaten Is a Diving Champion

A Soft Coated Wheaten Terrier, named Krista, came within an inch of being in the top 10 at last year's national diving dog championship. Krista jumped 10 feet 2 inches into the water. Her performance was impressive, considering she was competing against retrievers bred to dive and swim and other breeds much bigger than she is. In the preliminary events before the championship finals, Krista earned one first-place and two third-place ribbons.

6. They Appeared in Victorian Art

Even though they were owned by Irish peasants, some Wheatens still found their way into artwork. An example is the 1843 work, “The Aran Fisherman's Drowned Child,” by Frederic William Burton.