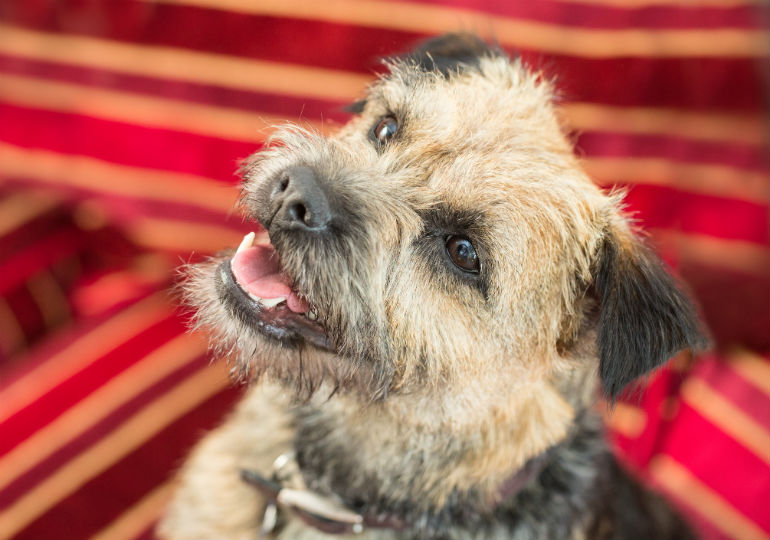 The understated Border Terrier (BT) may be overlooked in his plain brown coat, but there’s a lot to love about this unique little dog. He developed as a working terrier that could go to ground, as well as follow the horses on a hunt, and he is built perfectly for both jobs.

For centuries, hunters used several terrier breeds to hunt otter, fox, and vermin along the borders of England and Scotland. Along with the Bedlington Terrier and the Dandie Dinmont Terrier, the Border Terrier is one of those breeds, and all are thought to share a common ancestor. Shepherds, poachers, and farmers used the Border Terrier for his ability to follow prey into the ground and to happily fit in at home at the end of the day.

The Border Terrier was likely named for his association with the Border Foxhounds. He would hunt with them as the earth dog, used for going to ground. That means he would follow the quarry into underground tunnels, corner it, then either eradicate it or harass it into bolting back to the surface. To be safe and successful at his job, the Border Terrier was bred to be energetic, alert, and agile. He also needed to be able to run quickly over any type of ground and squeeze through narrow openings.

Flyball, agility, and tracking are popular with some Border Terrier owners and are excellent ways to stimulate your dog’s mind. But if you want your Border Terrier to experience the thrill of the hunt in a formal setting, consider earthdog. This perfect Border Terrier sport involves sending your dog into man-made wooden tunnels, ranging from a simple 10-foot length to intricately complex tunnels, after real prey, such as rats, that are not actually harmed. At the end of the tunnel, there are a couple of tame rats in a cage, so the dog gets all the excitement of cornering his quarry with no risk to either the dog or the rats.

One of the unique features of the Border Terrier is his loose-fitting hide. Whereas the term “coat” refers to a Border Terrier’s hair, “pelt” or “hide” refer to his skin, which should be thick and moveable. In fact, the only terrier standard that calls for a loose hide is the Border Terrier’s. This characteristic protects him from any bites or scratches delivered by the quarry and allows him to wiggle in and out of tight underground tunnels. The only way to truly test the hide of a Border Terrier is to grasp it gently over the back with both hands and lift it slightly.

The otter-shaped head of the jolly, yet sensible Border Terrier is another trait that sets him apart from other terriers. His temperament is one more. He was bred to work with foxhounds that were similar to the Harrier, so he needed to run peacefully with them on a hunt. That meant being less dog-aggressive than some other terriers that hunted on their own. The Border Terrier doesn’t have the fiery, ready-to-go personality that some people look for in a terrier, but this allows him to easily live calmly with other dogs.

This explains the BT’s appeal. He is a dog that is described as “hard as nails” and “game as they come” when he is out in the field on a hunt, but also good-tempered and affectionate when at home. He is eager to do his best, appreciates his friends and the world around him, and although he likes to think for himself, he is easily trained.