9 Fascinating Facts About the Pointer—the Cadillac of Bird Dogs 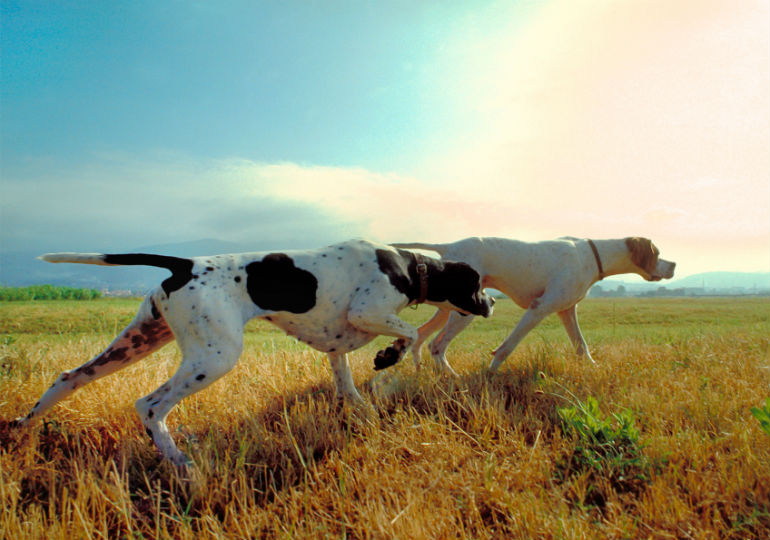 The alert and even-tempered Pointer is an amiable companion, both when out hunting in the field and when relaxing with his family at home. Here are nine fascinating facts about this athletic and biddable member of the Sporting Group.

1. Pointers are thought to have originated from Spanish Pointers. At the end of the War of Spanish Succession in 1713, British army officers returned home from Spain with these Pointer predecessors. Later, Italian Pointers found their way to England and were crossed with the Spanish Pointers, leading to the Pointer of today. America most likely didn’t see the introduction of Pointers until the time of the Civil War.

2. For the art lover, the history of the Pointer can be traced through various works of art. From dogs identifiable as early Pointers on the walls of 3,000-year-old Egyptian tombs, to French and English paintings from the 17th through 19th centuries, to 19th century bronze figures, the evolution of the breed is brought to life.

3. Even before the invention of guns, Pointers were used for hunting birds. The dog would be sent out to locate prey, and then the hunter would throw a net over the dog and any birds it had found, as a way of catching them.

4. After guns changed the hunter’s methods, the Pointer was taught to be “steady to wing and shot.” That means the dog stands still after the bird has been flushed and until the gun has been fired, waiting for further instruction before carrying out retrieval of the bird. This ensures the hunter can get a clear shot at the quarry without risking the dog’s safety.

5. Pointers are bred primarily as hunting companions, and as such, they are single-minded when out in a field environment. Their sole focus is locating birds, and they will run hard and fast to do so. Many Pointer owners take advantage of this high-spirited instinct and participate in field trials with their dog. Pointers fare well in setting modern day records as a top-winning breed.

6. This breed has a willingness to learn and a natural athleticism, which can make it successful in the obedience ring. Even if you don’t intend to compete with your dog, proper obedience training is a must to keep your Pointer out of trouble. They are fun-loving dogs, even in adulthood, have a tendency toward mischief, and love being the center of attention, so teaching them the rules of your household will go a long way.

7. Pointers love creature comforts. They don’t think of themselves as dogs, but rather as fellow family members. Even the hunting companion will flourish when he’s part of the family and allowed to enjoy a few luxuries.

8. Children and Pointers are a great combination. These dogs will play all day with their young companions. But as they should be with any breed of dog, very young children need to be taught how to properly and respectfully interact with their Pointer. Supervision is also essential, as small kids can be accidentally knocked over or smacked by the swinging tail of an enthusiastic Pointer.

9. According to the breed standard, Pointers are dignified dogs that are never timid with strangers or other dogs. They are also protective of their territory and family. This makes them fabulous watchdogs that will alert you to anything amiss.

Can’t get enough of the Pointer? Check out our video below!