Great Pyrenees vs. Kuvasz: How to Tell the Difference

Livestock guardian dogs are known for their impressive strength and size. After all, they need to intimidate predators to protect their charges. But these dogs can also be loving family pets. The Kuvasz (KOO-vahz) and the Great Pyrenees are two breeds that do both jobs quite well, but can you tell them apart? Members of the Working Group, they are both large, white dogs with luxurious coats. However, the Kuvasz is from Hungary and the Great Pyrenees comes from the Pyrenees mountains located between Spain and France. Below, are the differences between these two majestic and imposing breeds. 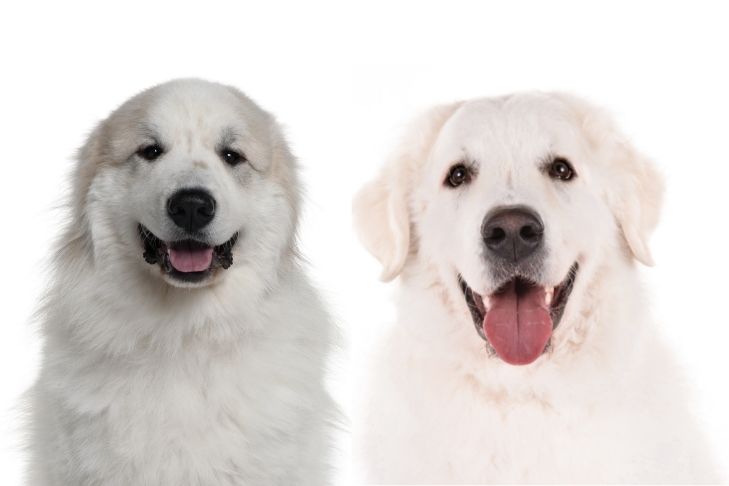 It’s common for the public to confuse Kuvaszok (the plural of Kuvasz, pronounced KOO-vah-sock) with Great Pyrenees. Judy Cooper of Tip ‘N Chip Kennels has lived with Great Pyrenees since she was a young child. She’s past president of the Great Pyrenees Club of America and her kennel has produced around 350 champion Pyrs. Although she thinks the two breeds have different looks today, decades ago they would often be confused. “That was one of the distinct reasons we kept the double dew claw on the rear feet of the Great Pyrenees, so you could distinctively tell the difference between the two breeds,” she says. “Now there is definitely a difference in the head look and the coat look and even the overall appearance, but a lot of people still confuse them.”

Lynn Brady of Szumeria Kuvasz has been breeding Kuvaszok for about 30 years. She’s past president of the Kuvasz Club of America and, along with her co-breeder Connie Townsend-Brady, was the AKC’s Working Dog Breeder of the Year in 2012. Brady believes the two breeds are often confused because the public is less familiar with the rarer Kuvasz. She’s frequently asked if her Kuvaszok are Pyrenees. “When I reply no, and explain that it’s a Kuvasz, the first response is usually something like, ‘Cuba’s. Oh sure, I know what that is.’ After years of hearing the same response, I smile and attempt to acquaint them with the Kuvasz.”

The confusion stems from the similarities between the two breeds. Cooper points out that they are both livestock guardian dogs with similar coat colors. “Their purpose is to guard the flocks and to guard the dogs that are herding the flocks,” she says. “The Kuvasz is all white and the Great Pyrenees is principally white. The difference being it’s acceptable for up to one third of the Great Pyrenees to be other colors, like grey, red, or tan.”

Brady agrees the shared purpose produced similarities, but she also points out the dogs’ similar physiques. They are both large dogs with medium bone, have a thick double coat, and have wedge-shaped heads with dark brown almond-shaped eyes. There is, however, a clear distinction between the coats. “The Kuvasz standard states that the coat is straight to very wavy while the Great Pyrenees is straight to slightly undulating. There is a coarse outer guard hair with a soft, downy undercoat,” she says.

Although both breeds are of similar weight (100 pounds and over for the males) and height (28-30 inches high for male Kuvaszok and 27-32 inches for male Pyrs), there are subtle physical differences the savvy person can look for, such as the possible patches of color allowed by the Great Pyrenees standard or the rear double dew claws on the Pyrenees versus the lack of rear dew claws on the Kuvasz.

Brady also calls attention to the head of the dogs and the demarcation between where their forehead begins and their snout ends, known as the stop. The Kuvasz standard has a stop that is defined but never abrupt, where the  forehead gently rises above the plane of the muzzle. However, the Great Pyrenees should have no clear stop. “As a friend of mine once said, if you could only see the head of the dog through a fence, you should be able to tell the difference between them,” Brady says.

Cooper, on the other hand, considers temperament to be the main difference between the breeds. The Kuvasz, she says, is more independent and sharp and she considers the Great Pyrenees to be a little softer. “Kuvaszok are more cautious around people that they don’t know, and they have a little bit more of a guarding instinct than the Great Pyrenees,” she explains. “The Great Pyrenees certainly do guard and spring to action when necessary, but they are a softer dog, and I would say easier in most cases as a family dog with children.”

Cooper describes Pyrs as laid back when mature. Rather than running through the house or demanding pats, you can often find them lying by your feet, at the front door, or by the foot of the bed. They are a great fit for somebody who wants a big dog that doesn’t take up a lot of space. Pyrs can do well in smaller environments because they don’t have the excessive exercise requirements of some other large breeds. They are also successful at Obedience work, although they need really efficient trainers to achieve high scores.

Although most people are impressed with their size and color, Cooper thinks the Pyrenees’ gentleness is their defining quality. They make great family companions because their nature is to be good with the shepherd as well as the sheep. They are also wonderful with kids, from babies on up. “They are very gentle natured,” Cooper explains. “That’s what they are supposed to be. They are also great with small animals like lambs and ducks, and great with cats and even other breeds of dogs.”

Brady calls the Kuvasz confident, intelligent, and well-mannered although she says they can stay silly and playful for their entire lives. They like order and a calm environment, plus they will defend what they see as their property and family if they perceive a threat. That means early socialization and training are an essential part of ownership. Kuvaszok can show great affection for children as long as they are exposed to them at an early age.

According to Brady, a trained and socialized adult Kuvasz is a joy to live with as they are quiet and respectful. They have an uncanny sense of the emotional and physical wellbeing of the humans around them which is why some succeed as therapy dogs. Although not demonstrative, these dogs need to be part of the family. “I would suspect that the average Kuvasz owner would say that the most definitive characteristic of the breed is their loyalty and devotion to their family,” Brady says. “Followed by yes, they shed, and what is the best vacuum cleaner for dog hair?”