Switzerland has brought us many wonderful dog breeds, but perhaps none as popular as the large, tricolored Bernese Mountain Dog. These gorgeous and affectionate dogs are built for demanding work and are instantly recognizable for their size and beautiful markings. But there is another Swiss breed with similar looks and origin. The Greater Swiss Mountain Dog is a faithful and strong member of the Working Group who people sometimes confuse for the Bernese. Read on to learn how to tell the difference between these two dogs of the Swiss Alps.

Karl, who has bred over 100 champions and performance titled Berners as well as two National Specialty winners, believes the main similarity between the two breeds is their appearance and historical function. “They are both large breed dogs that are black, rust, and white. They were also both developed to be used for pulling carts with goods to market, and both are Swiss dogs.”

But the Berner is a more common breed than the Swissy and therefore more familiar to most people, a point made by Liz Coit, AKC breeder of merit and president of the Greater Swiss Mountain Dog Club of America. “People often ask if the Swissy is a Berner, or even better, a ‘shaved’ Berner. Of course, as puppies, the Swissy is often confused with a Beagle, and as adults with a Saint Bernard. So, I would say it is the Swissy’s lack of familiarity with the general public that is the issue.” 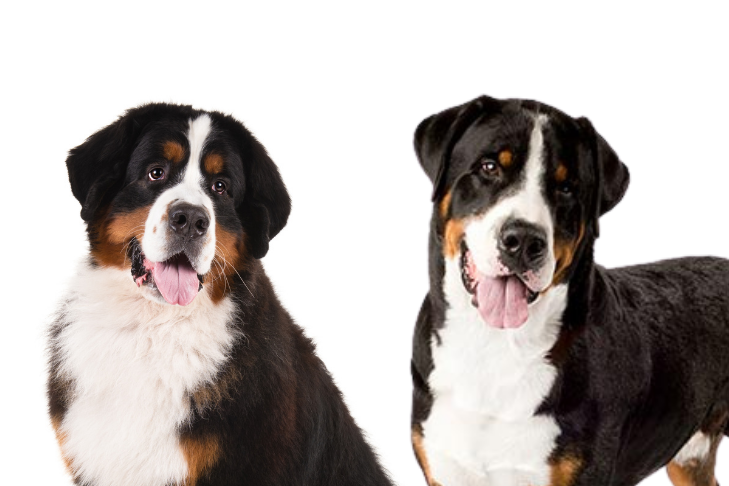 Coit, the owner of three Swissies including Shine who was named Ambassador of the Breed in 2020, agrees about the similarities in both looks and origin as farm dogs. She says of both breeds, “They are noted for their striking tricolor coats and presence. They are extremely devoted and loyal to their families but friendly enough to have gone to market as well as greet customers and friends who came to the farm. Both are vigilant sentinels, warning the family of perceived danger or just a change in the direction of the wind!”

Differences in Coat and Personality

Although people mistake the Swissy for the Berner, there are definite physical differences. According to the Greater Swiss Mountain Dog breed standard, male Swissies can be up to 28.5 inches tall at the shoulder, and they weigh between 115 and 140 pounds. The Berner is slightly smaller with males measuring up to 27.5 inches tall and weighing between 80 and 115 pounds.

The coats are another main difference between the breeds. The Bernese has a long double coat and the Swissy has a shorter coat. Although Coit points out both have a thick undercoat so you can expect a great deal of shedding. She elaborates, “The Swissy and Berner standards differ somewhat in areas like markings (white and brown) and head shape as well. For the Swissy, we are tolerant of more variation in markings than the Berner breeder, and of course, our coat is not as much a hallmark as with the Berner.”

Although both breeds are gentle with children and attached to their families, there are differences in personality as well, with the Swissy having a more intense working temperament. The Bernese Mountain Dog breed standard describes Berners as “alert and good-natured,” whereas the Swissy breed standard describes them as “alert and vigilant.” In addition, while the Berner can be aloof with strangers, the curious Swissy is more willing to make friends with new people. Karl says both work well with people and are easy to train, but “Bernese are a little softer than the Greater Swiss.”

The Berner was developed as a general-purpose farm dog in the Bern region of Switzerland. According to Karl, farmers used them to move dairy cattle from one pasture to another, pull milk and cheese carts to market, and guard the farm. Perhaps thanks to that heritage of working closely with the farmer, this sweet and loving breed is dedicated to their family.

Karl considers their beauty, stockiness, and devotion characteristic of the breed. She says living with a Berner means lots of hair and shedding. She suggests a good vacuum cleaner and leather furniture! These dogs love to go on walks and hikes and adore the cold weather, but she says they don’t like to be left alone outside for extended periods. In addition, they don’t do well in high temperatures. They can live in warmer climates, but you should limit their exposure during the heat of the day.

Coit says the Swissy is the oldest and largest of the Sennehund breeds (Swiss mountain dogs). They too were developed as all-around farm dogs, with tasks such as herding, driving stock to market, hauling milk carts, and keeping watch over the family and farm. That watchdog heritage means the Swissy still functions as a sentinel with a deep bark of warning and alert.

They too are a loving and loyal breed who wants to be where their family is. Coit says they are not busy dogs but are happy to relax all day as long as they have a long walk in the morning and evening. However, you can take them hiking every day or teach them to draft or herd and they will enjoy that too. Being a herding dog, they will tend to gather children, and their history as a carting dog makes it essential to train loose leash walking skills.

Both breeds can make amazing companions for knowledgeable owners or for the owner willing to learn what these large breeds require. But research potential breeders to be sure the pet you bring home is healthy and well-bred. Karl suggests Bernergarde.org to research potential Berner breeders. And whether or not one of these powerful Swiss breeds is right for you, now you can appreciate the difference between them when you have the good fortune to meet one.