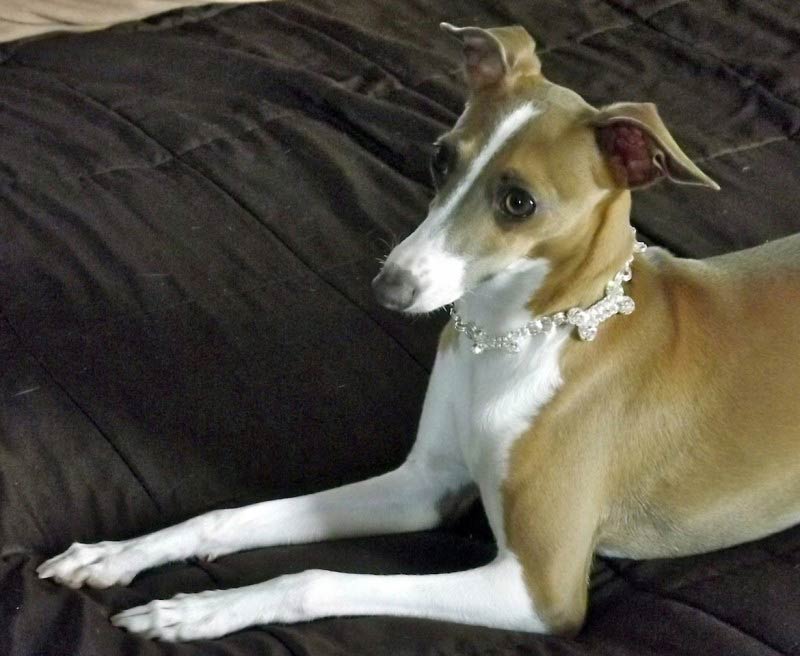 Much has been written about the need for socializing puppies at an early age, but sometimes even an experienced breeder might forget about this necessity, especially if it's been a while since they raised a litter.

One of the things I’ve learned during my almost 50-year involvement with Italian Greyhounds is that this breed is perhaps somewhat overly sensitive to lack of early exposure to a variety of experiences. Easily stressed by something new, even a well-adjusted IG often trembles a little when encountering something new.

I was reminded of this recently after seeing a truly elegant dog repeatedly missing out on the awards in the show ring because of his fear of being touched by the judge, especially a male judge.

So, how does one go about socializing a young puppy, when so many public places are posted as being off limits to dogs? Well, there are some that are not. PetSmart, Petco, and other pet businesses welcome vaccinated dogs who are either being carried or on a lead.

Those are the obvious places that will allow dogs. A little local research can bring up others. Most Lowe’s stores will permit a dog in someone’s arms in the store. Restaurants with outdoor seating often will permit a well-behaved dog to sit with his owners. Other businesses are frequently all right with it, as long as one asks.

Needless to say, bringing a dog to any public place means keeping him under control and, in case there is an accident, cleaning up after him immediately. Carry some paper towels or napkins and some baggies at all times when out and about with a dog.

Care must also be taken that strangers, particularly small children, approach the puppy slowly and gently. Having some small treats handy (for the dog, that is!) is a good adjunct to an outing of this sort. A treat should be given immediately after any even slightly stressful occurrence.

This is not a one-time thing. Puppies need to be exposed to new people, new locations (including new surfaces like concrete, tile, grass, and so on), and new situations repeatedly and often.

These outings should be pleasant and fun—not just for the puppy, but also for his human. Dogs are amazingly keyed into their people’s feelings and attitudes. Isn’t this why we have a dog in the first place—particularly a sensitive breed like the IG?

At what age should socialization begin? Some can start at home, soon after birth, but what we are addressing is the need to expose puppies to the outside world. As soon as necessary inoculations have been given and are in the puppy’s system long enough to be effective, the little creature needs to learn that there is more to life than the comfort zone of home. This is particularly important for owners who live in a quiet, remote area and/or have few visitors.

Socialization is also an ongoing process and should be part of the puppy’s regular training regime. Vital for an IG who is to be shown in conformation or performance activities, learning about the big, wide world is equally important for the dog whose only job is to be a beloved pet.

P.S.: I learned this the hard way, unable to transport my Top-20 ranked bitch to our national. If you ever intend to fly with your IG, be sure to introduce her to an airline-approved carrier at an early age.

Lilian S. Barber is an AKC judge, longtime Italian Greyhound breeder and exhibitor, and author of four books about the breed. Since 1975 she has written the Italian Greyhound column for the AKC Gazette. Her columns appear in the March, June, September, and December issues.