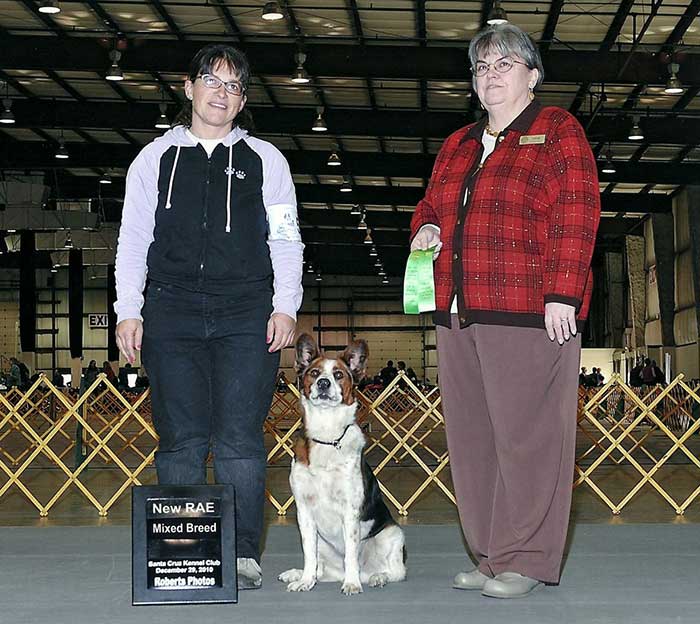 Woodacre’s Court Jester UD RAE is the first All-American Dog to earn the AKC Rally Advanced Excellent (RAE) title which he achieved on Dec. 29, 2010 – just a little over 8 months after AKC opened competition to mixed-breed dogs. The RAE is the most advanced level title in AKC Rally.

Dino is owned and trained by Jackie Phillips of San Leandro, CA.  He also was the second All-American Dog to achieve the AKC Obedience title of Utility Dog. He holds more than 30 other titles in multiple sports and venues.

Dino is truly a success story as he was surrendered to a shelter by his family at about 9 months of age because they had “too many kids and not enough time for the dog.” The shelter scheduled him for euthanasia after labeling him as “out of control and untrainable.”

Luckily, Grateful Dog Rescue of San Francisco did not believe the shelter and took Dino into their care. Jackie adopted him when he was about a year old and immediately set out to prove the shelter wrong by training Dino.

In addition to his success in dog sports, the now 9-year-old Dino has twice been honored with Honorable Mention awards in the AKC Humane Fund Awards for Canine Excellence (ACE). Dino serves as a search and rescue dog specializing in finding lost pets. He has worked more than 500 cases and made multiple finds of lost animals.

For more information on the fun sport of AKC Rally and how to get your dog involved.