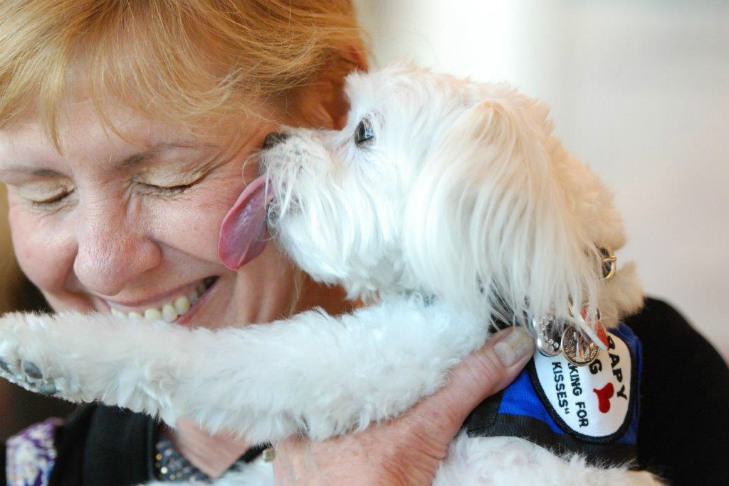 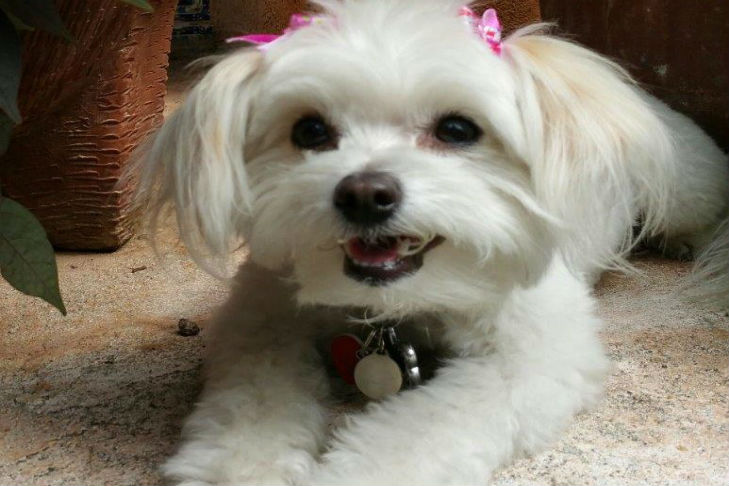 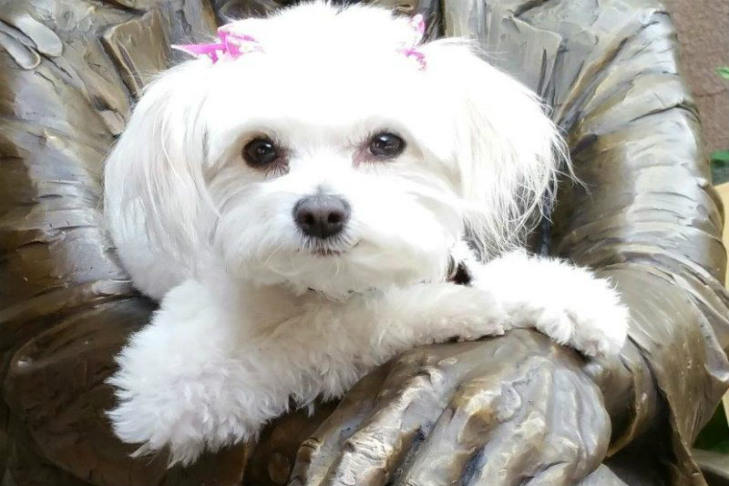 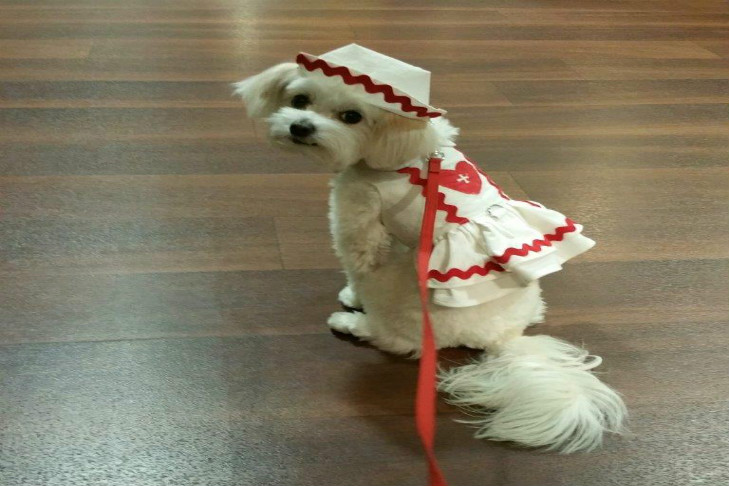 Zoe was a terrified matted puppy when animal control picked her up and turned her into the county shelter. She had no social skills and was marked for euthanasia before a private rescue saved her. Diane & Ken Bykowski of Scottsdale, Arizona, adopted the little dog and saw something special. Today, Zoe is an honored therapy dog who has helped thousands of people. Zoe the Therapy Dog CGCA CGCU TKA was the first dog in Arizona to earn the AKC Therapy Dog Distinguished title for making 400-plus visits, and she was nominated for the AKC Award of Canine Excellence (ACE) in the Therapy Dog category. Read her story:

The animal control officers almost missed Zoe as they drove through the streets of south Phoenix.

The puppy barely weighed 5 pounds. Her white fur was nearly black with dirt and filled with mats. She skittered away from anyone who came near her.

After catching the pup, they transported her to the county shelter where an examination revealed that she had fleas, ear mites and was very underweight. Put in a kennel run with other dogs, she sat in a corner, shivering, and made no contact with canines or humans.

No one claimed her. Shelter officials had a tough decision, but based on her extreme fear and lack of social skills, they did not deem her as adoptable and marked her for euthanasia. But, lucky for Zoe, the shelter worked with private rescue groups that evaluated dogs not placed for adoption.

When the volunteer with Ruby Ranch Pet Rescue & Sanctuary pulled Zoe’s card, it just read “one-year old stray – no name.” They took the small dog back to their rescue and began nursing her back to health.

About 10 days later, Diane and Ken Bykowski of Scottsdale, Arizona, were looking for a new family member and contacted Ruby Ranch.

“They told me that Zoe was quiet, intelligent, attentive, loved attention and would be a perfect only dog. She had no interest in other dogs; she had no aggression, but wanted nothing to do with them,” Diane said. “When I got her, she became glued to my side.”

After Zoe had settled into life with the Bykowski’s, Diane got busy and Zoe began to “blossom.”

“I took her everywhere to socialize her and enrolled her in an obedience class. I worked with her every day for short 15-minute sessions of basic commands, play, easy tricks and car outings. She learned trust and loved human attention. I knew she was special.”

The trainers told Diane about the AKC Canine Good Citizen test, and that became her goal for Zoe, who later passed with “flying colors.”

Not long after, Diane was attending an awards dinner for a friend who is an oncologist. At the same ceremony, a therapy dog received an honor for its work helping patients.

“I decided that evening that Zoe would be a perfect candidate for this type of work. I wanted her to be the best qualified therapy dog in the valley. In the next few years, Zoe earned her AKC Community and Urban Canine titles. Attending and passing a trick class was our next goal.”

Today, Zoe, at 10 years old, holds the AKC Trick Dog Advanced title and is a registered therapy dog with the Alliance of Therapy Dogs, making visits at least four times a week and bringing happiness to many lives.

Her assigned visits through POW are the Life Care Center of Scottsdale, where she was named Volunteer of the Year in 2013; the Sante North Rehab Center; Barton House; and Virginia G. Piper Cancer Center. Through Hospice of the Valley, she rotates weekly visitations between two memory facilities and has done weekly visits to a group home and a private home, as well as Sherman House on the Mayo Hospital Campus.

Zoe also volunteers in the ABC Read program with Gabriel’s Angels. “She meets weekly with three elementary students who are reading well below grade level. They read to her and are building confidence and self-esteem while improving their comprehension and oral reading skills,” Diane said.

In 2016, Zoe became part of the inaugural Navigator Buddies at Sky Harbor International Airport where she helps destress passengers and bring comfort to those arriving or leaving. “She fits right in with the airport known as America’s Friendliest Airport.”

Along her journey, Zoe has made special friends, including more than 52,000 followers on her Facebook page. She asked those followers to send birthday cards to a 90-year-old gentleman, “Mr. Al,” whom she had visited weekly for a year. The goal was 90 cards.

On his birthday, Zoe and Diane arrived with gifts, cupcakes, iced tea and 186 cards from 38 states and six countries. After Mr. Al passed, Zoe was assigned to a new homebound friend, “Mr. George.”

“Together they watched…their favorite team, the Chicago Cubs. Fortunately, the Cubs won the World Series during the sojourn of their visits,” Diane said. “When Mr. George passed the following spring, Zoe was asked to be part of his Memorial Service. To this day, she is still friends with the wives of both these wonderful men.”

Zoe’s cute looks and sweet disposition also earn her invitations to special events, including the Fix Adopt Save campaign for the City of Phoenix, Blessing of the Animals at the Franciscan Renewal Center, destressing days at colleges, and many fund-raisers for her rescue, Ruby Ranch.

In 2017, Zoe was awarded the Hero Award for Community Service from the Arizona Pet Project.

“This little hero has touched and changed not only my life but also many lives, especially veterans who she salutes as one of her many tricks,” Diane said. “As far as Zoe’s future, she will continue to bring smiles to everyone she meets and may be the subject of a motivational book.”

You can keep up with Zoe and her good deeds on her Facebook page: www.facebook.com/zoethetherapydog