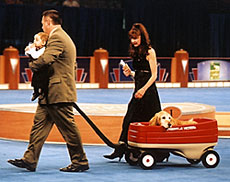 It is with great sadness the we report the death of Bullet, a 16-year-old Golden Retriever and the recipient of the 2002 American Kennel Club Awards of Excellence (ACE) in the Companion Dog category.

Despite being extremely old and frail, Bullet was able to alert his owners, Pam and Troy Sica, that their infant son, Troy Joseph, had stopped breathing. Troy performed CPR while Pam Called 911. The Sicas were later told that Bullet had saved their only child’s life.

Bullet was honored with a $1,000 check and sterling silver medallion at the nationally televised 2002 AKC/Eukanuba National Championship.

Bullet and the Sica family at the ACE presentation ceremony at the 2002 AKC/Eukanuba National Championship.