Unbelievable! You Can’t Imagine What Was Inside These Dogs 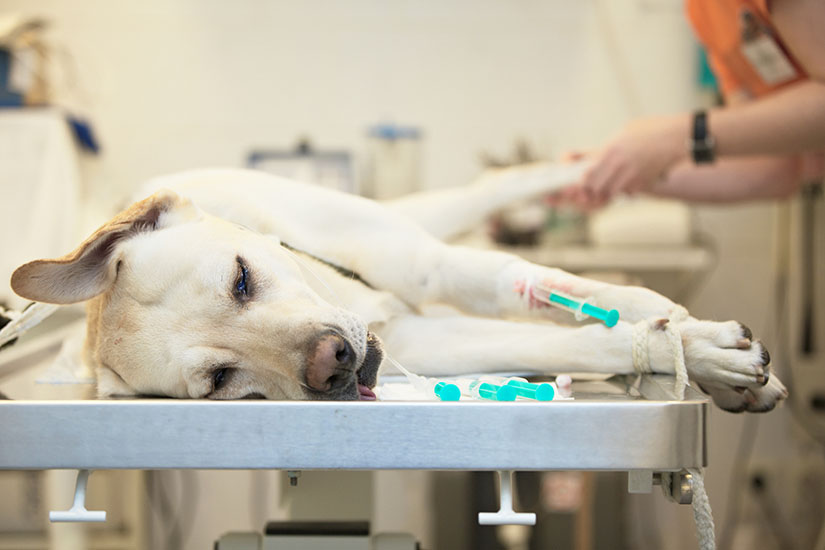 Tiki, a black Labrador Retriever, has taken her stand in the never-ending controversy over what kind of food will dogs find most appetizing.
Raw meat?
Bones?
Home-cooked meals or kibble?

It’s none of the above, according to Tiki, as veterinarians from Good Shepherd Veterinary Hospital, in Mars, Pennsylvania, discovered during a two-hour operation. Her vomiting, diarrhea, and loss of appetite was caused by 62 hairbands and eight pairs of underwear. They removed the items and sent her home, where she is recovering very well, her vet, Hisham Ibrahim, told reporters.

Tiki’s dining adventure may seem extreme, but it’s nothing next to what sent Benno, a Belgian Malinois (the same breed as the canine star of Max) into the veterinary emergency room back in the spring. Owner Larry Brassfield, of Mountain Home, Arkansas, says that he woke up on the morning of April 27 to find out that Benno had thrown up a .308 caliber bullet.

He rushed the dog to the vet, where surgery revealed that the dog had swallowed 23 live rounds of ammunition.

“It is something they certainly did not cover in school,” vet Sarah Sexton, of All Creatures Veterinary Hospital,  told the Associated Press.

Benno picked the bullets out of a bag Brassfield had left on the floor. Even though his dog has demonstrated odd tastes in the past—including marbles, socks, foil, shirts, and rocks—Brassfield never dreamed that he would bite a bullet, never mind 23 of them.

These stories made for breathless headlines, but the reality is that dogs eat all kinds of weird things all the time. Puppies are notorious for it but, as we can see from the stories of Tiki and Benno, some adults never outgrow the habit of swallowing anything they can reach.

Stuffed animals and squeaky toys (one dog became famous for swallowing five rubber duckies) are among the most common items, but there is no end to the weird things some canine palates will find irresistible. Socks are also popular, as one 3-year-old Great Dane demonstrated when doctors found 43.5 of them clogging up his gastrointestinal tract. Bras are also a favorite, and stories of these being pulled from a dog’s stomach frequently wind up in the news. And how many times have you read the story about the dog who swallowed the wedding ring?

The phenomenon is so widespread that one publication, Veterinary Practice News, runs an annual “They Ate What? Radiograph Contest.”

Not surprisingly, the sock-eating Great Dane was among the 2014 winners.

The scientific name for this habit is pica, says Applied Animal Behaviorist Dr. Mary Burch, director of the AKC’s Canine Good Citizen and AKC S.T.A.R. Puppy program. The term refers to an appetite for things that have no nutritional value—like rocks, underwear, and rounds of ammunition. Pica sometimes is seen in humans, but it’s a rare dog who has never tried to eat something that hasn’t tasted a stick, wall, squeaky toy or other inedible object. No one knows the cause, but in some cases, vitamin deficiencies may be to blame.

What can be done to stop dogs from partaking of things that could make them very sick? Prevention is the key, says Dr. Burch.

“First and foremost, you need to keep the dog safe. This means dog proofing the environment as much as possible and using a crate or gates in the house for safety,” she says. “Other things you can try for the dog who will eat a box of pencils and part of a shoe for lunch include making sure there are acceptable objects for chewing—a beef marrow bone, or toys that are filled with treats, like frozen peanut butter. A sufficient amount of exercise can help decrease the chances he will get into trouble.”

Dogs That Ate Themselves Into a Food Coma