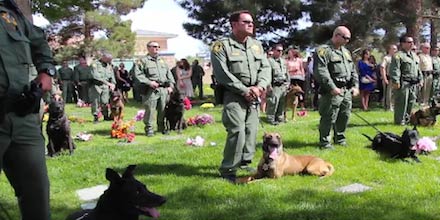 Police K-9s are as near and dear to our hearts as any other dog— and when they're killed in the line of duty, they deserve as much respect and honor as any fallen police officer.

Nicky of the Las Vegas Police Department passed away after sustaining injuries while succesfully helping to aprehend a double-murderer. Her fellow human officers and a group of K-9s said their last goodbyes at a funeral for her, with the K-9 units sharing a moment of barking in Nicky's honor.

RIP Nicky, our thoughts are with you and your entire police and K-9 family.

Nicky's fellow K9s say Goodbye!In a touching tribute to their fallen comrade, LVMPD K9s bark their goodbyes at the conclusion of the funeral service for K9 Nicky who died in action on 3-31-16 while helping apprehend a double-murderer.