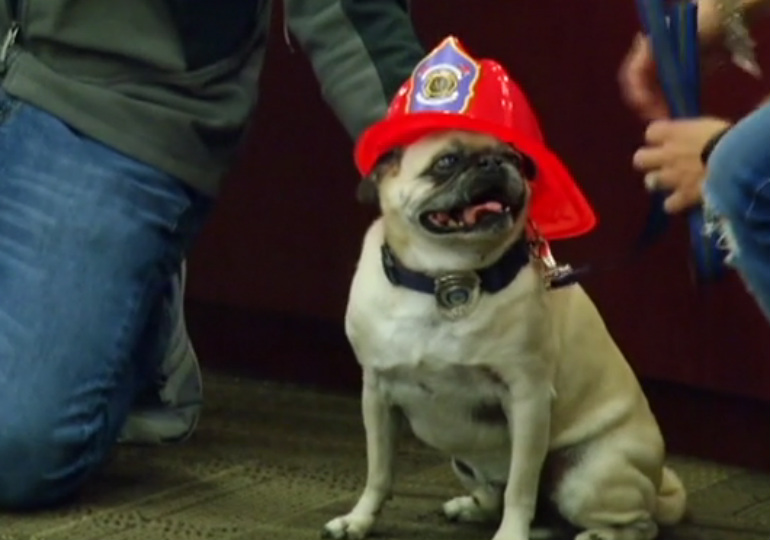 Dogs achieve incredible feats every day. And this one, an 11-year-old Pug named Jaxon from Meridian, Idaho is being hailed a hero.

Jaxon has received Meridian's “Hometown Hero Award,” after saving his family and their home from a fire, CNN reports. Jaxon is the first animal ever to receive this award. He additionally received an official probationary firefighter badge from the Meridian Fire Department.

Jaxon alerted his owners to a sparking outlet in their home, which neither Mikaela Sebree nor Todd Lavoie had noticed. His “particular bark” alerted Lavoie to the sparks which had started a fire.

“Dogs have different kinds of barks, so he has his 'somebody's at the door' bark and then he has his 'holy crap something's happening' bark,” Sebree said.

Lavoie was able to distinguish some of the flames with an extinguisher and then called the fire department.

“Certainly his actions and the actions of this dog saved that house from potentially igniting and catching on fire and going up into walls and up into the attic and causing significant damage,” said Meridian fire chief Mark Niemeyer.

Way to go, Jaxon! This Pug is a hometown hero for sure!

See Jaxon receive his award and firefighter badge in the video below.

To learn more about the loving, charming, and mischievous Pug, click here.