One Moment They Had a Bright Future as a Search-Dog Team. Then It Was Gone.

We had Jaco less than 10 months when it happened.

Jaco was a German Shepherd Dog exported from the Czech Republic when he was 16 months old. I wanted him to be my next scent-detection dog, a partner in the work I’ve done for more than a decade, finding the missing and the dead.

He was a beautiful, wary creature, with an exotic gold and dark brown sable coat. When David and I went to pick him up, he stood at my husband’s side, looked at him, and growled. We soon realized a sweetness lay behind that wariness. Jaco learned to bury his head in our legs and hold still, tail swishing gently while we stroked him.

Once he started formal scent training, nothing else existed. Finding the hidden material so he could get a tug with a ball on a rope was his world.

Despite some quirks, he was a good boy. Sincere, hardworking, and predictable. He wanted to search. He wanted to play tug. He made me believe in our future as a team.

I took him to two scent-detection seminars in a row. He was powerful, enthusiastic, and beautiful. I was in heaven. An FBI trainer admired how simple Jaco made the work appear: Run to the source; stand if the terrain was too rough; lie down if he could.

Jaco would freeze, tail angled up like a flag, dark amber eyes glowing.

Four days after we returned home, I was working at my desk. Jaco was asleep next to me. I heard a familiar sound. A dog’s leg pounding on a wire crate. I ignored it. He was probably scratching an itch and his leg went awry. It continued.

Jaco lay on his side, jerking rhythmically. His legs paddled, his neck arched, his eyes rolled back. Foam emerged around his pulled-back lips. I don’t know how, but I dragged him from the crate. He was urinating, simultaneously rigor stiff and jerking. I held him, trying to cradle his head, talking nonsense. “You’re a good boy. You’re such a good boy. It’s OK, buddy. You’ll be OK.”

I was sure he was dying.

After a few moments, he stood. “Jaco,” I said, and went to touch him. He moved as though he might bite me, but then backed into the corner of the study, standing panting, pupils dilated so much his amber eyes were black. He didn’t recognize me. I didn’t approach him.

I don’t know how long it took, but Jaco finally looked at me, wagged his tail, and stumbled over to lick the tears from my face.

The Odds of That?

Jaco was never the same after that first seizure. We took him to our university vet school’s neurology department. Idiopathic epilepsy, the vets said. No known cause. No cure.

Seven months after Jaco’s seizures started, I got another diagnosis, and my dog and I became an oddly matched pair of patients: Idiopathic epilepsy for him. Invasive breast cancer for me.

My cancer had probably taken years to grow. His seizures came fast and furious and unpredictable every few weeks. David and I monitored Jaco, compulsively at first. Nights were the worst. For the first two years, I’d lie there, listening for any ambient noise that my mind might translate to that terrifying sound of Jaco’s feet paddling hard, uncontrollably against his wire crate.

For a full year and a half after Jaco’s diagnosis, with a ferocity of denial and magical thinking, I continued to train him as a cadaver dog. I even certified him—a vain act of faith. He could never be deployed on a search.

He still loved the training. But his once-joyous certitude in pinpointing scent morphed into fuzziness and doubt: a mental wobble and weakness that paralleled his body’s vulnerability. 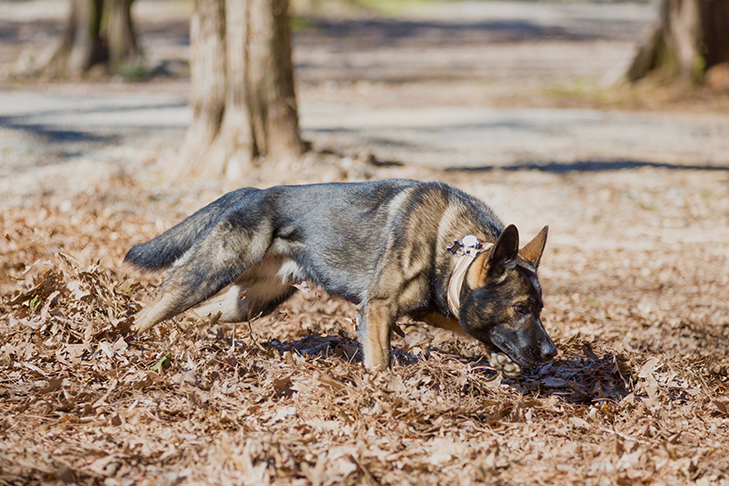 If I could choose one condition to go away, my cancer or Jaco’s epilepsy, I’m not entirely sure which I’d choose, so it’s good I don’t have a choice. Jaco’s epilepsy has changed our daily lives more than my cancer. For a year or so, we moved between appointments at North Carolina State University vet school’s neurology department, and the surgeon and oncologist at University of North Carolina’s cancer center.

It’s easier now. My surgical pain and swelling are mostly gone. My energy is back. During checkups, doctors admire my growing muscles. I didn’t get those by myself. Jaco got me off the couch and into the woods. Despite his seizures, despite his wobbles, despite his debilitating condition—Jaco helped heal me.

We medicate Jaco seven times daily. Eighteen pills plus a liquid in his food twice a day. We don’t set an alarm for my daily pill. We set alarms for Jaco’s. With one of his drugs, even a 20-minute delay might trigger a seizure.

But there’s been barely a change in either our bones or organs.

Perhaps Jaco isn’t the same happy as when he surged out of his crate to capture the scent of human remains. But he’s the kind of happy where he gazes up at me, wagging his tail, waiting for help to navigate our stairs.

The drugs are doing their job. Jaco hasn’t had a bad seizure for a year and a half. We know he will, though. People ask what causes it, and I explain that it’s still mysterious. There’s no cure. Nonetheless, I get all sorts of well-intentioned suggestions: CBD oil is right up there. Acupuncture. A ketogenic diet. Homeopathy. Lavender oil. Passionflower.

A few people ask when we’re going to “do something” about Jaco. We know what that means. One person intimated that I might want to consider the state of my marriage because of Jaco’s ongoing care needs.

David and I check in with each other frequently about euthanasia. Not yet. Not now.

As for my cancer? People reassure me that they know my cancer will never return—that it’s in my rearview mirror. I nod. Maybe. Cancer’s not simple either. It lurks. I don’t stare into its dark corners too intently.

Besides, we have dogs who need to be fed and exercised and trained.

This time, we brought home a 9-week-old sable puppy from a U.S. breeder I’ve known about for decades. This time, I’ve made fewer assumptions. Rev is a working-line shepherd with a good nose and an intense desire to do something. He’s funny, smart, and focused.

People ask, haven’t you started training Rev for cadaver? Why not? When?

Not yet. He’s not yet fully adult. And maybe Rev won’t become a cadaver dog. Rev’s future depends on what he enjoys, and what I’ll enjoy.

All I can think about is that right now, right here, on this day, David and I have two German Shepherds. We love them. They make us cry. They make us laugh. They absorb our time and energy.

Yes, they limit our lives. They also expand our universe.

Cat Warren is author of the New York Times bestseller What the Dog Knows: Scent, Science, and the Amazing Ways Dogs Perceive the World. She recently adapted that book for young readers.

Related article: The Nose Knows: Is There Anything Like a Dogs Nose?
https://www.akc.org/wp-admin/admin-ajax.php
Get Your Free AKC eBook