What Sets These Two Borzoi Apart in Rally? They’re The Only Ones.

Merlyn and Bambi relaxing after receiving their RACH rosettes.They are the first and only Borzoi to earn the title.

Until Dean Eelman married Melissa 17 years ago, he had never had a dog.

Over the years, they had two Golden Retrievers and two Keeshonden. But about five years ago, Dean met his first Borzoi, and he immediately fell in love with the breed. Six months later Dean and Melissa welcomed two Borzoi to their home: Merlyn and Bambi.

Merlyn and Bambi have achieved many Borzoi firsts in Rally, including being the first Borzoi to earn their RACH titles. Both dogs took only six months to obtain the required 20 triple Qualifies and 150 Master points to earn that RACH title.

An Obedient Borzoi? Make it Two.

While competing with a Borzoi can be challenging, Dean says he doesn’t think any of the challenges are unique.

“One challenge that we experience is that sometimes the courses are designed for the average size dog,” Dean says. “During our walkthroughs, we are constantly devising a plan on how to approach each exercise as with a large dog sometimes the execution isn’t as straight forward as with a smaller dog.  Another challenge that Melissa had to overcome is keeping Merlyn focused during a trial. Being a male sighthound, he doesn’t miss any movement which can be a major distraction while competing.”

Both judges and exhibitors are surprised to see the Borzois at Rally events.

“Watching your dogs is like watching dressage for dogs!” a fellow exhibitor told them. 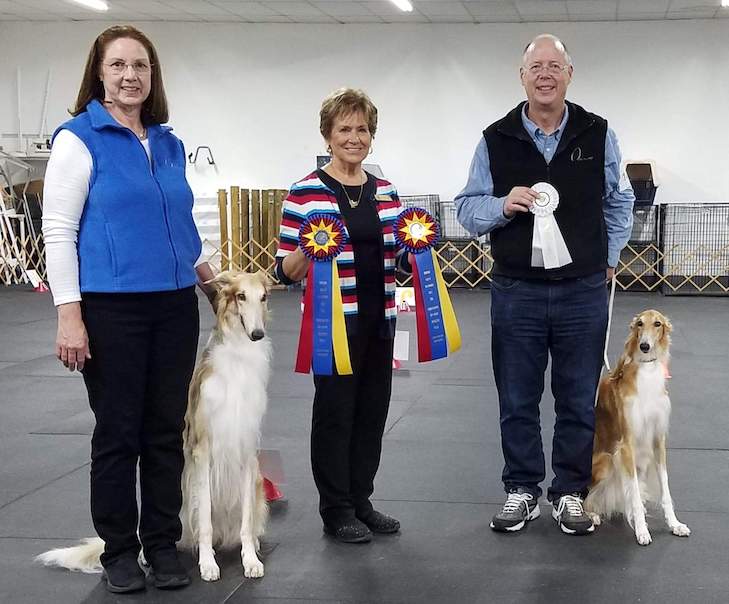 Merlyn and Bambi getting their RACH rosette by judge Carol Mett.

A Team in Marriage and in Rally

Another reason Melissa and Dean are unique — there aren’t many men in Rally, let alone a husband and wife competing in the same class. While they are both very competitive, they aren’t competitive with each other. “If one of our dogs wins, it is a win for both Melissa and me,” Dean says.

They also coordinate their dog’s major title achievements so they can both happen at the same trial. Merlyn and Bambi both earned their Master title and RACH title together.

“Many people, including Borzoi owners, say that the Borzoi does not train well,” Dean says. “The perception is that the Borzoi gets bored and shuts down after a few minutes.”

But to Dean and Melissa, it’s all in the training. “Borzoi are intelligent and can be repetitive in learning exercises.  When the trainer is persistent and expects the dog to learn, the dog will learn.  We have found that our Borzoi are fast learners!”

Dean and Melissa are beyond excited to compete at the Rally National Championship. Their hope is that they do well enough that they demonstrate to the Borzoi community and to others that the Borzoi is “more than just an elegant dog that runs fast.”

The AKC National Championship presented by Royal Canin is available to watch on-demand on AKCtv.