Who Put the Ridge in the Rhodesian Ridgeback? 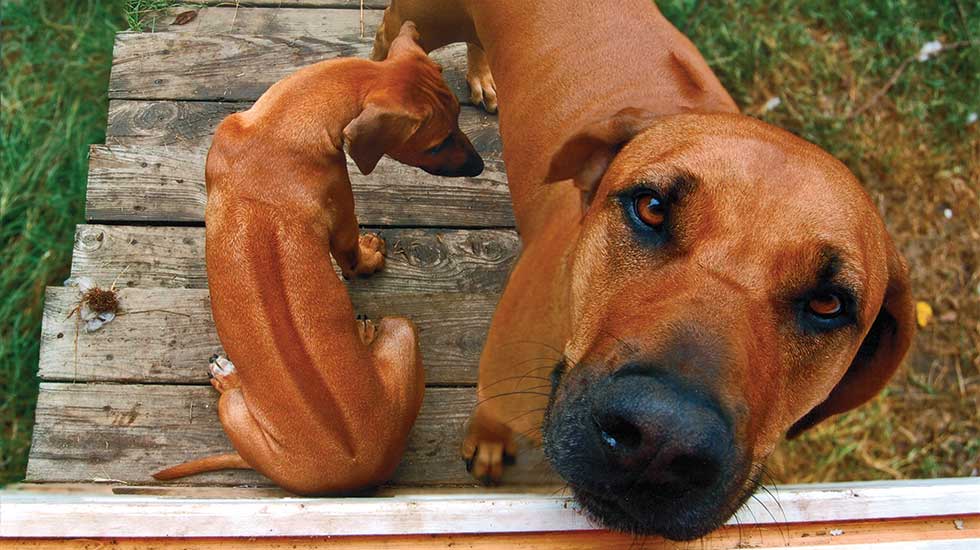 As with the Poodle’s pompons, the Chinese Shar-Pei’s blue-black tongue, and the rolling gait of the Pekingese, we’re often asked what’s up with the Rhodesian Ridgeback’s famous ridge. With the word right there in his name, it’s easy to understand why the ridge is, as the Rhodesian Ridgeback Club of the Unites States puts it, “the defining characteristic of the breed.”

The distinctive ridge on the back is formed by the hair growing in the opposite direction to the rest of the coat. Ideally, the ridge should be clearly defined, tapering, and symmetrical. It should start immediately behind the shoulders and continue to a point between the prominence of the hips and should contain two identical “crowns”—what you might think of as whorls—that are directly opposite each other.

Why is it there?

Nowadays, the ridge is purely aesthetic. But how it came to be gives us valuable insight into how and why purebred dogs are developed. We asked Barbara Rupert, an AKC judge of hound breeds, including the Rhodesian Ridgeback, if the ridge had an original purpose. Early on, she says, South African farmers bred purebred dogs (Great Danes,Mastiffs, even some terriers) to wild dogs, to create an athletic, tough hunting dog. As she puts it, “they found that the ridged dogs came home from the hunt.” Which is to say, they were the smart, tenacious survivors. So the farmers focused on breeding the ridged dogs to each other to preserve and maximize these important qualities.

Today, if a Ridgeback is, well, ridgeless, it is disqualified from competing in the show ring.

Of course that cosmetic anomaly doesn’t prevent this strong, athletic hound from competing in other sports, such as agility, obedience, and the AKC coursing ability test.

To watch the Rhodesian in action at a lure coursing trial, check out this video. Seeing such a muscular, high-endurance breed in motion is impressive. Lure coursing brings out the hunting instincts of the Rhodesian, without any prey animals paying the price for it.

Rhodesian Ridgebacks are strong, dignified, and even-tempered companions. Learn more about the breed here. If you think this breed is right for you, check out the AKC Marketplace for Rhodesian Ridgeback puppies.

Do you want a well behaved dog but don’t know where to begin? The Basic five commands e-book is a great place to start and will give your dog a strong foundation for future training.
*Turn off pop-up blocker to download
AKC Privacy Policy
Founded in 1884, the not-for-profit AKC is the recognized and trusted expert in breed, health, and training information for all dogs. AKC actively advocates for responsible dog ownership and is dedicated to advancing dog sports.