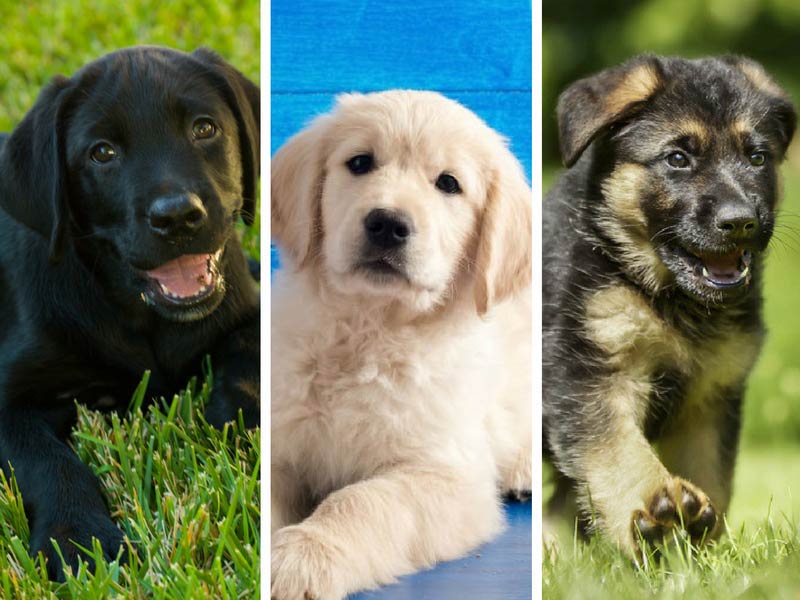 Ever year, the AKC announces the list of most popular dog breeds. The Labrador Retriever has been top of the list for three years in a row, followed in 2016 by the German Shepherd Dog and Golden Retriever.

While America obviously knows and loves these dogs, let's see how much YOU really know. Have you heard these fun facts about the top 10 breeds?

The Labrador Retriever is active, friendly, and outgoing. But did you know that, despite his name, the Lab did not come from Labrador, but from Newfoundland? The Newfoundland area was populated with small water dogs that, when bred with Newfoundlands, produced a breed referred to as the St. John's water dog, a prototype for the Lab of today.

The Golden Retriever is intelligent, friendly, and devoted. Everyone loves Goldens. And while they're goofy and fun, they are also incredibly smart. In fact, the first three dogs of any breed to achieve the AKC Obedience Champion title (first available in July 1977) were all Golden Retrievers.

The Beagle is merry, friendly, and curious. Did you know the only cartoon dog to have an honorary AKC registration is a Beagle? What dog is that? Why, Snoopy of course! And Snoopy isn't the only famous Beagle. President Lyndon Johnson had Beagles, and Barry Manilow had one that was featured on several of his album covers.

The French Bulldog is playful, smart, and adaptable. It's probably these traits that make him the most popular dog in New York City. While Frenchies were written off as a Victorian fad in the early 20th century, their popularity soon rose again by the end of the century. And it's no wonder: Frenchies are great companions and downright adorable.

The Poodle is proud, active, and very smart. While known for it's distinct cut, the Poodle hairstyle is not about fashion. In fact, the Poodle's hair was styled to enhance its swimming ability. Less hair made Poodles more buoyant, and puffs around the joints and upper torso were used to protect the dogs from the cold water. Today, Poodles are great swimmers, and they are agility, obedience, and conformation champions, as well.

The Rottweiler is loyal, loving, and a confident guardian. While the Rottie's origin isn't documented, it is likely that he descended from one of the drover dogs indigenous to ancient Rome. The drover dog has been described as a dependable, rugged, willing worker that possessed great intelligence and a strong guarding instinct. And if you know the Rottweiler, then you'll recognize many of these traits. Rotties are known for their work ethic, protective instinct, and loyalty.

The Yorkshire Terrier is sprightly, tomboyish, and affectionate. It is thought that a Yorkie named Smoky was one of the first therapy dogs on record. Smoky was found by an American soldier in 1944 in a Papua, New Guinea jungle, and when he brought her back, she was taken in by Cpl. William Wynne. Smoky rode in the corporal's backpack and is credited with saving the lives of soldiers by dragging a communications cable through an 8-inch-wide, 60-foot-long drainage culvert.

The Boxer is fun loving, bright, and active. While today the Boxer is probably found playing outside with his family, his German origins are all work. In fact, the Boxer was one of the first dogs in Germany selected for police dog training. In feudal Germany, the Boxer's ancestors were hunting dogs, and later, they were utility dogs for peasants and shop owners. The Boxer is, and always has been, a hard worker; he is also an alert, energetic family friend with a knack for unique facial expressions.

Interested in learning more about the top 10 breeds or any of the other AKC-recognized breeds? Check out the AKC breed pages for breed standards, personality descriptions, fun facts, and more.

Not sure which breed is right for you? Watch the video below to help you choose.