The Samoyed’s Coat Can Handle a Range of Temperatures 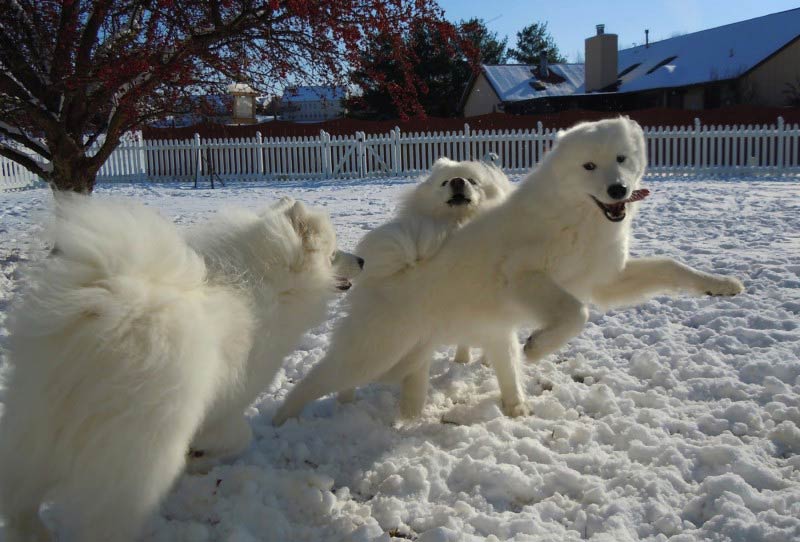 How many times have we heard comments during the heat of summer such as “Boy, your dog must really get hot”? Fortunately Samoyeds, and Arctic breeds in general, have a number of ways of adapting to variations in temperature.

The nature of a double coat, and the sheer abundance of coat, make for a very efficient insulator. Very little of the heat produced by the dog’s body is lost through contact with the frigid Arctic air.

A Samoyed’s double layer of insulation makes perfect sense in a northern climate, but what about the Samoyed whose owners live in the southern reaches of Florida, Texas, or Arizona?

In fact, Northern breeds are well suited to adjust to these temperature extremes—just as they do in the Arctic, where summer temperatures can rise into the 70s. The same insulating properties that kept them warm in the winter allow them to remain cool in the summer. Just as it’s more efficient to both heat and cool a well-insulated home, it is easier for a Northern breed to adapt to changes in temperature than a short-haired dog who may be more susceptible to heatstroke than his double-coated “cousin.”

Northern breeds use a number of different mechanisms for heat control. Despite the protection derived from a double coat, Northern breeds still face a challenge in that it is impossible to totally insulate themselves. The feet and legs, areas that come in contact with the snow, have unique properties that adapt to the cold, snowy conditions. Instead of “shutting off” the flow of blood to the extremities—not a good thing for sled dogs—arteries that carry warm, oxygenated blood run right next to veins carrying the cold, deoxygenated blood away from the limbs. Having the arteries and veins in such close proximity allows the warm blood to give heat to the cold blood, preventing the loss of heat to the exposed part of the dog’s foot.

The ability for a dog’s lower leg and foot to survive at cold temperatures isn’t well understood. It may be that the difference in the fat between the extremities and the body is similar to that of cows. In cows, the fat found in the extremities is liquid at room temperature, whereas the tallow, the body fat, is solid. This difference in the freezing/melting point of the fat allows it to keep from becoming solid at low temperatures and becoming brittle.

Evaporation is an extremely effective method to dissipate heat. Panting is the most obvious form of evaporation used by dogs. When a dog breathes in air through his nose, the many folds of tissue in the nose increase the surface area the air has contact with. The nose also contains tissue that perspires and has a large blood flow making it act like the radiator of a car. In panting, a dog expels hot air through his mouth. When a dog doesn’t want to lose heat, he merely exhales through his nose, thus allowing more of the moisture and heat to remain in this area with a greater surface area and minimizing heat loss. The dog controls the amount of heat loss by controlling whether he exhales through his mouth or nose, and by how wide his mouth is opened and the position of his tongue (during panting). This adaptation that controls heat loss allows dogs to compensate for changes in temperature.

It is important to remember that while people can take off layers of clothing to stay cool, dogs don’t perspire as humans do, and clipping their coat eliminates the insulating factor that helps them maintain their body temperature. Also, anything that inhibits a dog from expelling body heat efficiently, through panting, will keep a dog from being able to maintain his body temperature. Thus we need to leave dogs home rather than leave them in a locked car during the summer months.

The adaptations developed by Samoyeds and other Northern breeds to allow them to survive in the harsh climates of the polar circle make them uniquely able to adapt and thrive in warmer climates.

For more information on the Samoyed, check out the breed pages and visit the website of the Samoyed Club of America.

Marta DeMerath has owned Samoyeds since 1986 and has been active in conformation since 2001. She is a member of the Samoyed Club of America and serves on the club's Public Education committee. While members of the Spirit of St. Louis Samoyed Club, she and her husband Paul organized the first DNA collection event for the SCA Education and Research Foundation. Also while a member of the Spirit of St. Louis Samoyed Club she was the secretary, SCA Local Color Liaison, and co-editor of the Samoyed Update. Currently, she is the SCA Local Color liaison for both the Greater Milwaukee Samoyed Fanciers and the Heart of America Samoyed Club, as well as serving as the secretary for HOASC and co-editor of the Howls 'N Growls (GMSF newsletter). She also is secretary of the Belle-City Kennel Club in Belleville, Illinois. Outside of dogs, she taught general music, band, and chorus for 29 years and is now teaching third-grade special education—and looking forward to retirement in 2018.