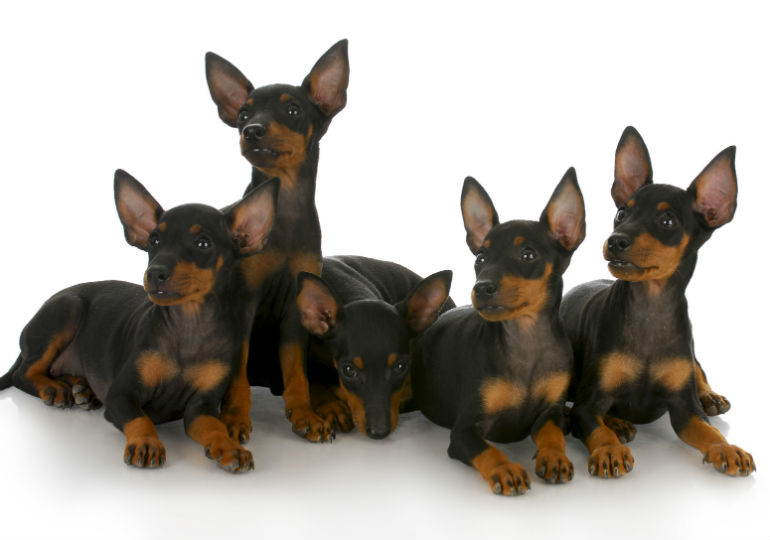 Unlike most terriers, which were bred for farm and country life, the Manchester Terrier has experience in the city. Originally a ratter and rabbit-coursing dog breed, today the Manchester is at home almost anywhere and is as sleek and elegant as the most chic urbanite. But these small dogs aren't just about looks: they're bright, keenly alert and observant, eager to please, and deeply attached to their people. And their people are deeply attached to them!

Manchester Terriers are known for being sharply observant and alert. With that gaze, you can be sure he doesn't miss much.

Despite his small size, the lively Manchester is always ready for action. He's sturdier than he looks, and the very definition of grace and elegance.

Bred to hunt vermin and small critters like rabbits, he's also fast, with a propulsive speed.

Manchesters love a challenge. In fact, they excel at many dog sports, like agility, lure coursing, rally, tracking, and flyball. Although they have the typical terrier independence, they approach learning new things with intense concentration and an eagerness to please.

Some have even added dancing to their repertoire.

Did you know that Manchester Terriers come in two sizes? The toy weighs 12 pounds or less, while the standard may weigh up to 22 pounds. Other than size, the only difference between the two is ear shape. The toy has a naturally erect ear, and the standard variety may have a naturally erect, cropped, or button ear. And speaking of ears…

Yes, he's elegant, fast, smart, and lively, but what the Manchester is best at is loving his people. He's an ace snuggler, craving close physical contact.

Speaking of dress-up, Manchester Terriers are sensitive to the cold and may need a sweater or jacket in colder weather. As a good rule of thumb, if you're cold, he is, too.

All in all, the only thing better than having a Manchester Terrier as a canine companion may be having two!