5 Ways of Looking at an Irish Wolfhound 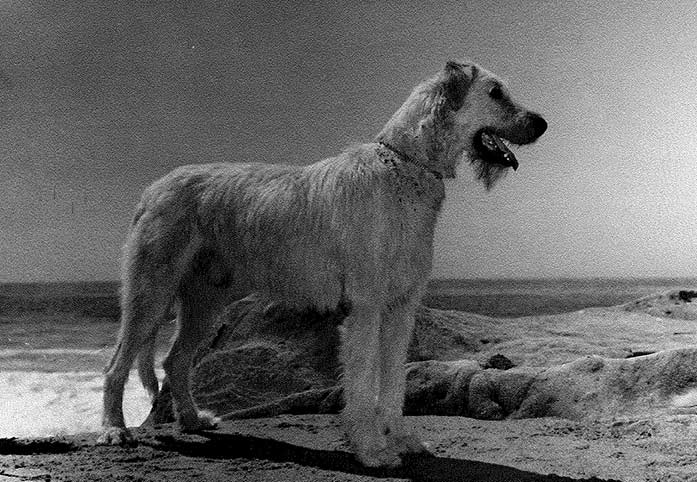 1.“A firm stand must be made against awarding prizes to hounds that are not absolutely sound, as the breed is essentially a galloping one and meant for rough rather than fast work, and therefore coat, soundness of limb, and freedom of action, must be insisted on.” —George Augustus Graham, who saved the breed from extinction, 1890

2.“Exuberantly affectionate, yet stately and sedate … So many are the great qualities of the Irish Wolfhound that he is sure to win friends and, when won, to hold them.” —Rawdon B. Lee, from his book Modern Dogs, 1893

3.“It need not be with the idea of making sales or champions that we take our dogs to shows. It is a duty we owe to the breed, to let the public see how many really good Irish Wolfhounds there are.” —Mrs. Norwood B. Smith, Irish Wolfhound Club of America president, 1927

The dog pictured is Ch. Ballymacad of Ambleside, the first Irish Wolfhound owned by legendary breeder Samuel Evans Ewing III. Ewing obtained the dog from Alma Starbuck, of California. This photo was shot backstage at the Westminster Kennel Club show in Madison Square Garden, in 1958. The “friend” being held onto is Charles Burrage, secretary of the Irish Wolfhound Club of America.

This program is recognized as the gold standard for dog behavior. In CGC, dogs who pass the 10 step CGC test can earn a certificate and/or the official AKC CGC title.
*Turn off pop-up blocker to download
AKC Privacy Policy
Founded in 1884, the not-for-profit AKC is the recognized and trusted expert in breed, health, and training information for all dogs. AKC actively advocates for responsible dog ownership and is dedicated to advancing dog sports.