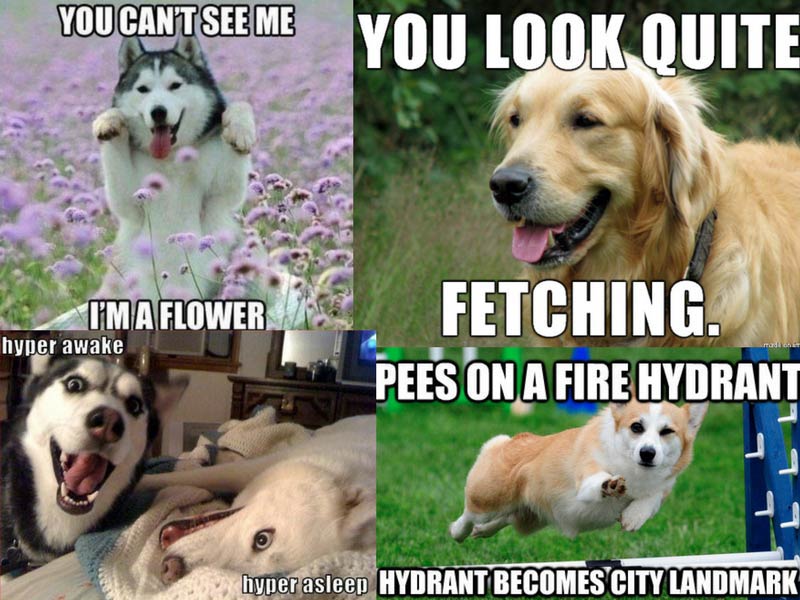 Need a good laugh? Looking for some dog-filled fun? Well, look no further. As lovers of all things dog, we at the AKC appreciate nothing more than a well-crafted dog meme. They’re funny, adorable, and often joke about things all dog owners and enthusiasts can understand.

Basically sums up my dogs

Doesn’t it seem like our dogs always do this? All of a sudden your pup is barking, and there is no rhyme or reason . . . at least not one you can figure out. Need to calm the incessant barking-at-nothing problem? We got you.

Admit it. We’ve all done it, and a dog has fallen for it. The ol’ “pretend to throw the ball, but don’t actually throw it” gig. And most of the time, your dog goes running after “the ball,” only to come back confused because he couldn’t find it. If your dog is really smart, he sees through your tricks and waits for you to actually throw the ball.

A wink from a super suave Pembroke Welsh Corgi. He’s fabulous, he’s fun, and he’s jumping over that obstacle and into your heart. He’s so famous that everything he pees on becomes important. Pees on the fire hydrant, the city makes it a national landmark. Sniffs a tree . . . and people everywhere come to visit and gawk at its awesomeness. It’s not easy being so amazing, but this pupper pulls it off.

We don’t know what you think, but to us it sure looks like this Samoyed is telling a scary story or a special secret to this crowd of pups. All the pups seem veeeeery interested in their full-size companion, and if she really is warning them about the big and powerful vacuum, they’d better listen carefully. Although many dogs are not the biggest fans of vacuums, others love them and let their owners vacuum their fur. To each his own, right?!

Even this little French Bulldog knows the Monday struggle. Mondays are the worst! The weekend is over, and the workweek begins. We understand this pup’s sentiment. And we wish we could be like our dogs that stay home and spend a majority of their time sleeping. Lucky ducks.

Think you’re a good runner? Have you run a half-marathon? Or even a marathon? But did you do it while pulling a sled? We didn’t think so. And neither does this Siberian Husky. He knows that it’s not real exercise unless you’re pulling a sled through the freezing cold. Bred as a sled dog, the Husky is known for his amazing endurance.

Ah, puppies. They have an affinity for bugging their parents, just as human children do. And this Husky mama looks less than thrilled to be awakened from her nap by a pup. Don’t worry Mama Husky, that little nugget will be asleep soon. After all, puppies sleep an average of 15-20 hours a day!

Does your dog know her name? Or perhaps, like this dog, she thinks it is: “Stop That” or “Get Back Here.” Sometimes, our dogs can have a mischievous streak . . . and we wonder if they ever get confused about what exactly their names are. While people can train dogs to do incredible things, we can still be curious about what they hear when we talk to them. Do they really understand? Or do they just hear a bunch of gibberish?!

Do you ever have one of those days where you feel just like this Basset Hound? We sure do. And some days, you gotta just collapse and say, “Man, that was ruff.” On those kinds of days, there’s only one thing guaranteed to cheer you up . . . and that’s love from your dog.

Raise your hand if you agree with this meme? Everyone should have his or her hand raised. And if the Samoyed isn’t your breed, then imagine your favorite one greeting you at the pearly white gates. It’s a great picture, right?! Dogs are the best, and if there’s something after this life, you gotta hope that includes our furry friends.

Houston, this is dog

This Husky is all suited up and ready for his first astronaut mission. Houston? No problem, we’ve got astro-dog on it. He may be a canine . . . but he’s got just the right endurance and work ethic for this mission. Don’t count him out, until you see what he can do. Go doggo go!

They went that way!

Quick! Direction Corgi says they went to the left. Follow them! And when you’re done, come back, and give this pup the pets he deserves for helping out. He’s one smart little guy. No one has ever rocked the “one ear up, one ear down” look better.

RT if this is your dog too. pic.twitter.com/sGOCyRzIZU

We all know this face. This is the face of a begging doggo. A doggo that is trying to get something out of you by putting on his best sad puppy face. Those puppy eyes are just so hard to resist. The cuteness wears you down, and your dog’s determination wears you out. Admit it, we’ve all given in to begging. It’s something we’re working on though. We swear!

Had to make a meme for AP Psych, this was the result

You see the joke this meme is making? Veeeeery funny. In case this one went over your head . . . Pavlov was a psychologist who did experiments conditioning dogs by using a bell. Hence, “rings a bell.” While Pavlov was all about classical conditioning, we’re bigger fans of B.F. Skinner and operant conditioning. Positive reinforcement all the way!

Look out everyone! This Golden Retriever has his A+ game on. He’s dishing out compliments left and right. And who wouldn’t want a compliment from this handsome doggo. With lines like these and his intelligent, friendly, and devoted personality, he’s a keeper.

Awwww, this Sammy is SUCH a good boy. And he loves hearing it. Don’t all dogs, even though they know they’re all good boys (and girls!)? With the adorable faces they have, we can’t help but continuously show our dogs just how much we love them.

Super dog is here to save the day! Don’t fear, human, this Golden pup will protect you from sketchy squirrels, rogue tennis balls, and intimidating bike riders. You don’t have to thank him, he’s a hero; it’s just what he does. And he does it for you!

If you have or know a Siberian Husky, you’ll be able to relate to this meme. Hyper doesn’t even begin to cover it. Huskies are bundles of everlasting energy! They have endless endurance that stems from their sled dog roots and also a mischievous streak, so watch out. If you’re looking to tire out this breed, you’ll want to combine mental and physical stimulation.

What do you see here? A beautiful field of flowers? That’s what we see. Alaskan Malamute? What are you talking about? There’s no Malamute here. Just kidding, just kidding. We see this Malamute doggo. He thinks he’s pretty good at blending in though . . . maybe he needs some hide-and-seek tips.

If you have a “cold-weather” breed, like a Samoyed, Siberian Husky, or Alaskan Malamute, you’ll know that their cold is not the same as your cold. It’s freezing outside, snowing like crazy, and you just want to sit inside with a cup of hot cocoa. Not these dogs, though! They are perfectly content to romp around in the snow and enjoy the winter weather. You can take the Sammy out of the Arctic, but you can’t take the Arctic out of the Sammy.

Isn’t this always the case? You spend so much money buying your dog all the best toys: chew toys, fetch toys, and everything in between . . . and yet, he always prefers to play with something that he’s not supposed to, like socks. Why are socks so much fun to play with? We really think toys are the way to go . . . we just have to convince our dogs of that, too.
Did these fun memes brighten up your day? We hope so! Memes are such a fun way to joke about our dogs that we love so much. Want to enjoy even more hilarious memes? Check out these Golden Retriever-specific memes. You won’t be sorry!

Are you looking for inspiration on new tricks to teach your dog? If the answer is yes, then this is the e-book for you!
*Turn off pop-up blocker to download
AKC Privacy Policy
Founded in 1884, the AKC is the recognized and trusted expert in breed, health, and training information for dogs. AKC actively advocates for responsible dog ownership and is dedicated to advancing dog sports.