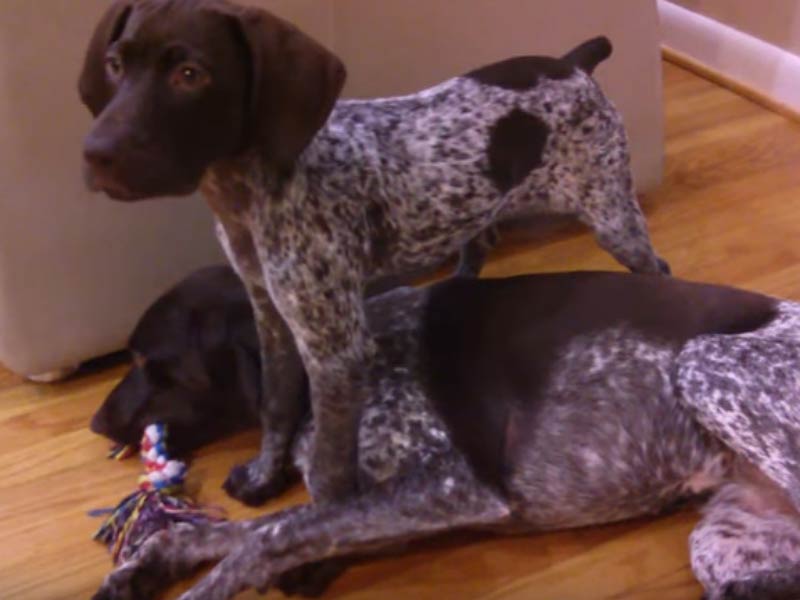 It's playtime for these German Shorthaired Pointers! Or, at least it is for the GSP puppy. His full-size companion doesn't seem so convinced that it's time to play. He puts in a little effort to keep control of the rope toy, but in the end, it seems like he'd rather take a nap.

“That puppy has too much energy,” he's thinking. “Why can't he just leave me alone?”

See this adorable puppy's energy (and his friend's annoyance) in the video below.

Clearly, the puppy's energy overtakes his friend. He is all about that rope toy and eventually he gets it.

Curious about how to keep a puppy active and out of trouble? Find out how, here.

And just to make your day a little brighter, we have another GSP puppy for you!

This little guy has spotted a fly zooming around his house and he does what pointers are known to do: he points.

Even though this guy is only 15 weeks old, he already is showing his breed instincts. He hasn't yet lifted his paw in the pointer stance, but he'll definitely get there!

Want to learn more about pointing breeds like the German Shorthaired Pointer? Check out the ones that compete in AKC Hunting events here.