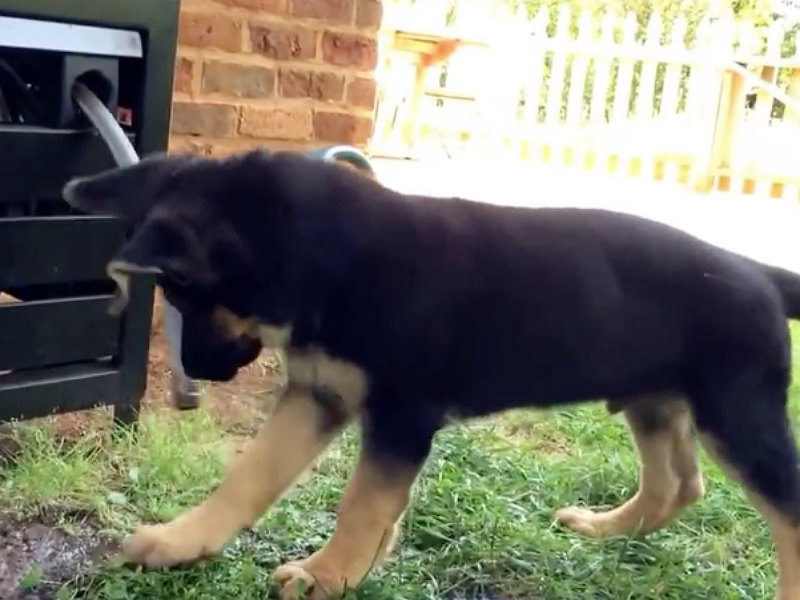 Puppies have an unparalleled curiosity. They are so interested in the world around them and are always excited to explore new things. Just like Kasper the German Shepherd pup.

Kasper and his owner are just hanging out in the garden when Kasper discovers a hanging garden hose dripping water. He is immediately interested and unsure of exactly what to do with it.

Watch as he hops around, pawing at the hose, and sticking his face in the water.

Silly pupper! Kasper is just a pup having the time of his life and we love seeing his energy and spunk. Water hoses, after all, can be a little confusing. And we can't help but swoon at Kasper's floppy ears as he hops around. They're just too cute.

Of course, we're not forgetting his big paws either. They're so precious; looks like he's going to grow up to be a big dog. When do puppies finishing growing? Find out here.

While Kasper is playing with the hose, this GSD named Topi is being a little sassy with his owner. We don't know what he wants…but it certainly seems like something. Take a listen.

That's one talkative dog. His owner doesn't even have to say anything, but he's whining away. Why do dogs whine? In this case, it's probably because Tobi wants something. But there are many other reasons. Learn more about dog whining here.

Looking to celebrate the German Shepherd in your life? Check out our German Shepherd specific-products on the AKC Shop. We also have toys, collars, dog bowls, and more. Whatever your dog prefers, we've got just the thing!

And for more ways to show your dog how much you love him (as if he didn't already know…) check out the video below.

Gardening for the pet friendly home