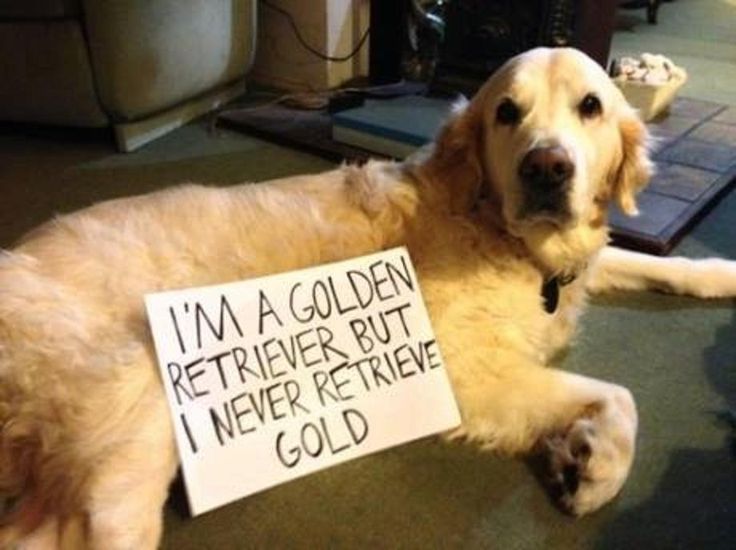 Memes are just one of many gifts the Internet has given to us. For us dog people, we’re unbelievably fortunate that the Internet produces dog memes left and right. Not only do these memes picture adorable dogs, but they’re also pretty hilarious.

Depending who you ask, certain dog memes are better than others. If you’re a fan of the intelligent, friendly, and devoted Golden Retriever, you’ll profess that there’s nothing better than a Golden meme. After all, what’s not to love about America’s Sweetheart dog?! Put their adorable faces with a quippy joke and poof: you’ve got brilliance.

So in the spirit of our love for Goldens, we’ve put together a list of 19 of the very best Golden Retriever memes. Enjoy!

LOL. While we know the real reason for the name “Golden Retriever” (color of the dog + bred for purpose), we thought this was hilarious. And wouldn’t it be nice if your Golden Retriever could find that pot of gold at the end of the rainbow and bring it back for you? We’d take it.

Learn to teach your dog to retrieve…even if it’s not gold.

Don’t even think about “walkies” unless you actually plan on taking your dog. They know you’re thinking about it…they see the leash; you can’t fool them. Like this Golden Retriever says, “what do you mean we’re not going for a walk.” There’s nowhere else to go, there’s nothing more important than walkies (other than maybe food)…and you won’t convince your Golden otherwise.

Some people may like chocolate-covered bananas, other people prefer chocolate-covered strawberries, but we prefer a nice, chocolate-dipped Golden Retriever like this one. We know, we know, this guy isn’t actually covered in chocolate, but mud. And he’s done a stellar job of dipping just his bottom half perfectly. He even looks like he knows that he’s in trouble, because there is a very involved bath in his future. If you need advice on getting the “chocolate” out of your dog, check out our grooming tips.

Why won’t she text me back?

What would dogs say if they could text? Would they, like we often do, wait around anxiously for their crush to respond? We’d have to say, yes…especially considering how many dogs sit at home (not so patiently) waiting for their owners to come back from work. Don’t worry sad Golden, we love you…especially because you sent a smiley face.

Dogs are so helpful on Christmas from AdviceAnimals

Anyone have a naughty dog like this Golden? Sometimes, certain dogs are a little more food obsessed than others. You gotta watch out for those guys! And if your dog’s one of ’em, check out our tips to prevent food stealing. After all, wouldn’t want your dog grabbing a snack that might harm him.

Totally accurate, right? Our dogs always look amazing….whether they’re just lounging on the couch, playing with toys, or zooming around in the yard. Sometimes, they could use a bath or a haircut, but don’t we all need those from time to time? In general though, our dogs, like this Golden Retriever, are a 10/10. And that’s why we take so many pictures and videos of them and share them all over the Internet. Everyone should get to appreciate their adorableness.

Dogs can do a lot of things, Golden Retrievers especially, but sadly reading is not one of them. They can, on the other hand, hunt, serve as guide dogs, work search-and-rescue, or simply be a devoted companion. Golden Retrievers are versatile dogs and one of the most popular in the United States. So while this doggo can’t read, we love him all the same.

Ah, there’s nothing like waking up in the morning to a wagging tail and a wet nose. And if your dog can’t get on the bed to wake you up, he goes for the next best thing…making the most noise he possibly can. Even if you’re tired and don’t want to get up, you still do it for your dog. Doggie alarm clock = the best alarm clock.

when u put something in the cart when ur shoppin with ur mom and u hope she doesnt notice pic.twitter.com/85NgEMGiVZ

We all remember grocery shopping with our parents as kids and trying to sneak in special snacks into the cart. They always seemed to catch you. And we’d have to think they’d catch a Golden Retriever, too. Although, we wish they wouldn’t. Sometimes you see all these dogs on the Internet and can’t help but wanting one of your very own, but just remember, it’s a big responsibility! If you are ready, though, there’s AKC Marketplace to help with your search.

Don’t you hate when your “dog program” crashes? This Golden looks like he’s had a little bit of a rough day. You can’t even tell if he has his head in a hole in the grass or if his face is just smushed. He’s had enough of these walkies, he says. Maybe he’s had just a little too much exercise for the day…and we don’t blame him for needing a little rest.

The smiles on this pair of Goldens are too perfect! They obviously are very proud of the joke they’ve just made. They’re too “punny.” No wonder they’re known as exuberant, friendly, and even downright silly!

This Golden Retriever may think and pretend to be bad to the bone, but we all know he really is a good boy. Look at him! Even with his bad boy sunglasses, he still looks like a perfect angel. He’s just chilling in a kiddie pool, enjoying the summer day. We think he’s a very good boy. He deserves a treat.

Every dog in the world

Here’s a Golden meme that every dog owner can relate to. Why do our dogs have to do this to us? They always want to be let inside, only to indicate minutes later, that they want to go back outside. Inside, outside, inside, outside. And as silly (and maybe annoying) as it is, we comply to their wishes and love them anyways! We’d do anything for our dogs.

Look at Norm rocking his flower crown! He’s embracing festival season, when young people go to see live music outside and dress, well, like this. Now, your dog might not be interested in a flower crown, but he might like a nice bandana or sweater (depending on the season!).

Golden Retrievers aren’t particularly known for barking…usually they bark when they feel it’s necessary. When is it necessary? Obviously at 3 AM. Because a leaf looks sketchy. Our dogs always seem to find the strangest things to bark at, often at the strangest (or most inappropriate) times. And sometimes, they do more than bark, they howl. Ah-ooooo!

Do you ever feel like this Golden? Sitting down at your computer, looking at something from work, and you think: I have no idea what I’m doing. The struggle is real. Lucky for this dog (and all dogs), he doesn’t have to do anything on the computer. He just has to hang out and be a dog. And if he’s a working dog, lucky for him, there’s still no complicated technology involved.

Awwwww. How cute is this?! If anyone could “smell” love, it would be a dog. Dogs have 225 million scent receptors in their nose, while we only have five million. No wonder dogs like Golden Retrievers have been working as scent detectors for decades.

Man these joking Goldens really have an affinity for puns. We just can’t get over their smiling faces and tongues. Speaking of tongues, the dog on the left has a black spot on his. What does that mean? Most of the time, it’s nothing to worry about, just pigmentation!

The migration of the rare golden retriever fish. What a rare and beautiful sight in nature.

This is by far our favorite meme. Just look at all those Golden Retriever’s swimming in one place! It’s adorable and the caption is hilarious. Those dogs may not be migrating, but they may be after some waterfowl. After all, the Golden was bred for hunting upland game and waterfowl. Which makes them great swimmers!

Did you have fun with these memes? So did we! For more fun, check out our Entertainment section, where we have quizzes, cute dog videos, and everything in between.

Dogs exhibit all sorts of bewildering, funny, and sometimes worrisome, quirky behaviors. Ever wonder what he's thinking and where the behaviors come from? Download this e-book to find out.
*Turn off pop-up blocker to download
AKC Privacy Policy
Founded in 1884, the not-for-profit AKC is the recognized and trusted expert in breed, health, and training information for dogs. AKC actively advocates for responsible dog ownership and is dedicated to advancing dog sports.