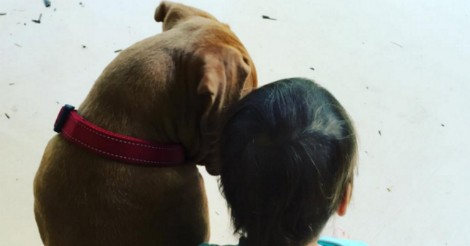 Anyone who has only seen one in passing or in the movie, “Turner & Hooch” might think that Dogue de Bordeaux actually translates to “really big dog that drools.” But this mastiff-type breed, that was used in ancient Roman times as a war dog, is a uniquely sweet, patient, and sensitive dog who is deeply attached to his people. Their size and imposing physique belies their gentleness and devoted nature. Now, about that drooling — Dogue de Bordeaux owners know to keep drool rags at the ready. Those long strings of drool end up on walls, floors, ceiling, furniture, and you. But there's more to these dogs than their drool, and here are nine images that show the breed is a big dog with an even bigger heart:

The Dogue de Bordeaux may have the largest head of any dog breed, or human, for that matter.

Even puppies are larger than many full-grown dogs.

Can you guess what I'm thinking? (By Jerome Aubray)

Posted by I Love My Dogue de Bordeaux on Saturday, February 27, 2016

But that doesn't mean they aren't incredibly cute!

This little guy won't be able to fit under there for long.

The breed is remarkably patient, even when their human siblings want to play doctor.

Dogues de Bordeaux are known for their serious expression, even in the most comical poses.

Or when they're experiencing a moment of pure bliss.

Did we mention the drooling?

Aside from the drooling, there's another sure thing about this breed: at the end of the day, they're all about the love.

Is this breed right for you? Lean more about the Dogue de Bordeaux here.